RPA - how should Companies Plan for this Future? 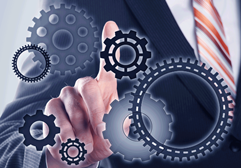 All in all, it’s a sobering assessment and an indictment of a broad swath of industry writing. However, a case can be made KPMG reaches these conclusions from a limiting perspective: one which fails to completely capture the full nature of this remarkable technology and overstates planning challenges.

The KPMG perspective on this robotic technology is that will mature in three stages:

From this perspective, the article surveys Advisors and Service Providers to determine views on robotic automation, including the anticipated time required for the technology to fully mature (conclusion: 3-5 years). The clear implication is it will only be firing on two to three cylinders – so to speak – until it reaches its end goal of autonomic/cognitive capability.

However, there’s no reason to assume autonomic or cognition functionality is an end state for the technology, or anything more than a subjective extension of prior development. In fact, the better argument may be the essence of RPA’s value proposition and cognitive functionality is antithetical.

Currently, this technology is transformational because it radically lowers operational costs while increasing performance levels, is quickly and easily implemented, and has a light integration footprint and an equally light investment burden.  Would that necessarily continue to be the case if it “matured” to autonomic/cognitive features with “elements of AI”?

No one has expectations of this technology matching the capabilities of IBM’s Watson, just as no one anticipates it to incur Watson’s capital costs (estimated to range between $900M & $1.8B). But what will “cognition with a touch of AI” require in development capital and how would that impact pricing? Barring an equally radical uptick in benefits, even a fraction of a fraction of Watson’s development outlays would radically alter the economics of robotic software for the worse and fundamentally change its business model.

Further, the technology has already moved beyond the level of KPMG’s “Class 1” with UiPath’s release 8.0 which enables robot integration with ERP and BPM systems, as well as a platform for orchestrating large groups of robots with organized queues of back office work. These innovations may be mirrored in Dell’s recent announcement of the Automated Full Time Equivalent (AFTE) and AFTE Command Center for its BPO service offerings, and provide the vehicle for large scale automation. This vehicle, rather than being mired at KPMG’s “Class 1", is quickly gaining recognition by BPO service providers as a ‘game-changer’ for their industry.

The KPMG article also appears to have a singular perspective on existing barriers to RPA adoption; barriers said to make planning difficult for progressive firms wishing to embrace the technology. These barriers are reported to include:

Of course, uniform, optimized, business processes are always desirable, but robotic automation is hardly dependent upon them. Since a key benefit of this technology is light and flexible integration across internal and web-based applications, lack of application integration would seem to be a need rather than a barrier. The industry is certainly changing and growing, but even a quick glance at UiPath and Blue Prism websites reveal product adoption by major corporations – ones whose internal policies filter out immature vendors.

Planning for the Future

Companies interested in this technology should feel confident this present time is opportune for planning for deploying it in their operations. The value proposition is growing with UiPath’s release 8.0 innovations, and continuing innovation is chopping the timeline for the next wave of capability - “digitalization” – which will allow robotic process automation to transform unstructured data: written natural language; images and speech – all of which are currently unsuitable for automation – into structured, digital, data which can be automated.

The first step in planning is acquiring hands-on knowledge about key areas of implementation scope: the technology; required skillsets; deployment techniques; effort levels; benefit expectations; implications for operational change and organizational risk; maintenance and support. Without some reasonable level of expertise in these areas, planning will be a guesstimate facing almost certain failure.

A pilot project is the best way to gain this expertise. Although there is often a difference in rigor and formality between small and larger organizations, the key steps for implementing a pilot project for new technology are very much the same for both.

The details behind these steps can be found in this blog.

The KPMG article brings its own perspective to the debate about the hype and reality surrounding robotic automation. There’s no question this emerging technology has attracted its share of overblown claims and understated complexities. Yet the value proposition is in fact compelling – and it exists today. Will it get better over time? It certainly will. Should the prospect of a future “better” diminish a current “good”? The answer from the UiPath perspective is clearly no.