At UiPath Together Washington D.C. Agencies Say the Time To Scale RPA is Now

At UiPath Together Washington D.C. Agencies Say the Time To Scale RPA is Now

Fast and efficient may not be the first words the general public thinks of when they hear the phrase “federal government,” but at UiPath Together Washington D.C. both were repeated over and over as Robotic Process Automation (RPA) leaders from government agencies showcased their projects implemented over the past year.

“There’s nothing else that we have in our toolkit that can do what RPA can do,” said Gerard Badorrek, Chief Financial Officer (CFO) of the General Services Administration (GSA). “When you think about the pressure we have in budgets, the additional work that is hitting all government employees, RPA is a solution and it’s a solution that employees are excited about.” 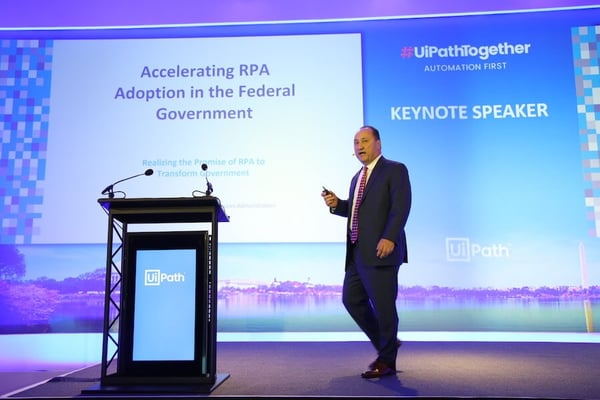 Badorrek’s keynote focused on the GSA’s automation journey, from the first mention of RPA to the 14 Robots they now have in production—with 11 more slated for the end of the fiscal year.

“As you enter this automation world you don’t have to build a football stadium,” he said. “Just get started, deliver some Robots, and get things done.”

From the get-go, the GSA had about a dozen processes that could have been automated with RPA, Badorrek said. The exercise of determining which of those processes to move forward with gave birth to a program they called “eliminate, optimize, or automate” to review all processes within the agency. “I think the opportunity that is really out there is the process improvement opportunity,” Badorrek said. “RPA is a chance to improve your processes. In addition, RPA is a chance to eliminate and reduce backlogs.” The GSA estimates that their RPA initiatives will create 230,000 hours of projected employee capacity, which comes out to about 19 hours per employee. If you could do that across the 2 million employees in the federal government, Badorrek said, that would be 38 million hours—an out-of-pocket cost savings of about $2.7 billion.

That sense of urgency Badorrek conveyed around implementing RPA as a solution to the increased pressures on government agencies—and their employees—was echoed throughout the day. “The larger extension of doing more with less is doing everything with nothing,” said Harrison Smith, Acting Senior Procurement Executive for the Department of Treasury. “And if you try to do that with human beings, you’re going to burn them out. So why RPA? Necessity.”

Brian Jacobs, Director of Enterprise Integration for the Office of the Deputy Assistant Secretary of the Army for Financial Information Management, said that their RPA implementation is about getting their highly-skilled workforce back to doing the work they were hired to do.

The office has automated the data gathering process for a tri-annual report. The Robots deliver the information faster so that the employees can analyze the data and make decisions quicker.

RPA is also an opportunity for government agencies to begin new initiatives that previously would have taken too many resources, said John Lockwood, Robotics Lead at the Defense Logistics Agency (DLA).

“This is not rocket science,” Lockwood said. “This is just the next step.” 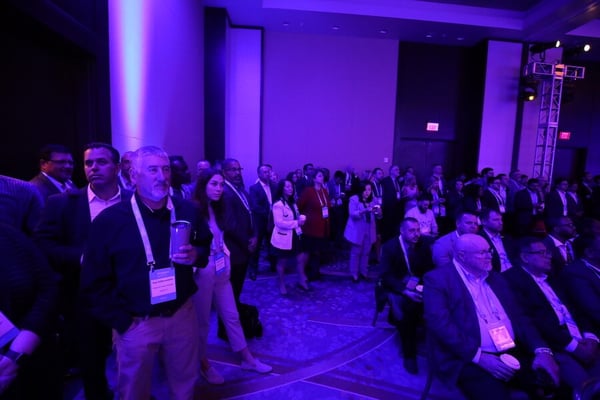 The future of government is now

Kicking off the event, Jonathan Padgett, UiPath VP of Public Sector Sales, told the crowd “the question for government agencies implementing RPA is no longer ‘will it work?’ but ‘how will we scale?” Padgett’s point is one I’d like to think everyone took home from the event. With government speakers from the Village of Deerfield (Illinois), Montgomery County (Maryland), the Delaware Treasurer’s office, seven government speakers, Uber, and McCormick Spices, Padgett presided over the biggest RPA public sector event ever held.

The messages about the return on investment (ROI) of RPA for government agencies was loud and clear throughout the UiPath Together event: Automating processes in the government isn’t science fiction, it’s a reality. It isn’t just the future, it’s the present. Now the mission for agencies is to scale RPA and make it even better.

Did you miss this great event? Get exclusive videos and presentations from the event in our free event pack.

Be sure to check out the UiPath events page to find out about all our upcoming events!