Humans of UiPath: Anna Hotsa on Why Communication is Key in Product Management

Humans of UiPath: Anna Hotsa on Why Communication is Key in Product Management

Anna Hotsa joined Stepshot, a leading provider of Process Documentation software based in Lviv more than two years ago. The company was acquired by UiPath in 2019. She started as a Developer and then decided to make a change and joined the Product Management team. Even though it’s been some time since her first interview, she still remembers it.

“The interview with Stepshot was one of the most interesting and unexpected interviews I ever had or heard of. I had a discussion with Denys who’s our Tech Lead. It felt like having a conversation with an old friend. We talked about JavaScript and other stuff. Then I got the offer and I joined the team because I felt like I really belonged there.”

After a few months of work, the team released the first professional version of the product. And then they went on a trip to Egypt to celebrate. “After that trip, Sasha, one of the founders said that we need to focus on RPA now. And that’s when UiPath came in.”

Some changes came with the acquisition of the company, but Anna and her teammates realized that the culture at UiPath is quite similar to the one they knew before. “We understood that there’s a great opportunity for us. Some members of the team got to travel to meet other people from the company and everything became more and more interesting.” So far, Anna has traveled to the Bucharest office, where she met some of the people she constantly works with. “I went to the Bucharest office once. And don’t get me wrong, our office in Lviv is very nice. But when I got to Bucharest, I was amazed. The place is huge and very, very nice. I love the people there.” 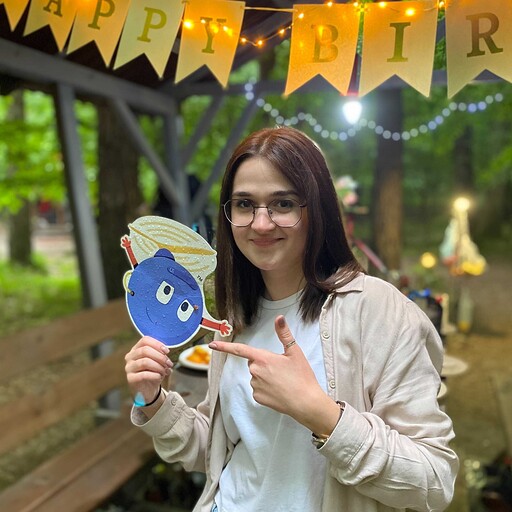 At the beginning of 2020 she joined the Product Management team. One of the things she enjoys the most about her role is the fact that she can work with many people around the world. She also learned a lot since switching from Engineering to Product Management. “One of the most important things I realized is that communication is extremely important. People say and understand things differently. I work with people from different countries and different teams like Marketing or Legal. Not only technical ones.” And this doesn’t apply only to communicating with colleagues. Interacting with customers and adapting to their way of communicating can also be challenging. “This was something very new for me and I started enjoying it, but it’s not an easy task. Because I’m very, very familiar with the product and sometimes they wouldn’t see something that for me is obvious. But I feel like I learn from any of these meetings.”

Outside of work, Anna loves books and board games. She used to play them a lot in the office, with her colleagues. “We had board games nights at the office and enjoyed spending time together.” She also likes drawing. She studied arts in high school. “I used to dream of becoming a Designer or an Architect. That dream changed pretty fast.” She's also has a huge passion for cooking and skiing, but most importantly traveling. It's something she often does with her teammates as well. "Last year we went to the Portuguese island of Madeira. It was one of the best trips in my life. "We booked huge villa for eight of us and rented cars to visit the best places around... We spend some time apart, some time together, and I felt very comfortable."