It has been a fascinating journey so far to watch the adoption of RPA technology among client organizations. We have observed several different paths to adoption while everyone is still wondering if there is one template for the best approach.

Given the simplicity of this technology and the openness of some providers, such as UiPath, offering a free community version of their product, we have witnessed in many organizations in addition to company-planned implementation, some “spontaneous” adoption coming from the employees themselves. They are adopting an RPA tool and creating for themselves several automated processes to simplify their daily work.

It is tempting at first to dismiss such stories as anecdotal and to believe that the true value of RPA resides only in large-scale organized deployments at the enterprise level. However, upon reflection, I have come to realize that this personalized, bottom-up adoption of RPA may actually play an important role in propelling companies forward on their path to full automation. 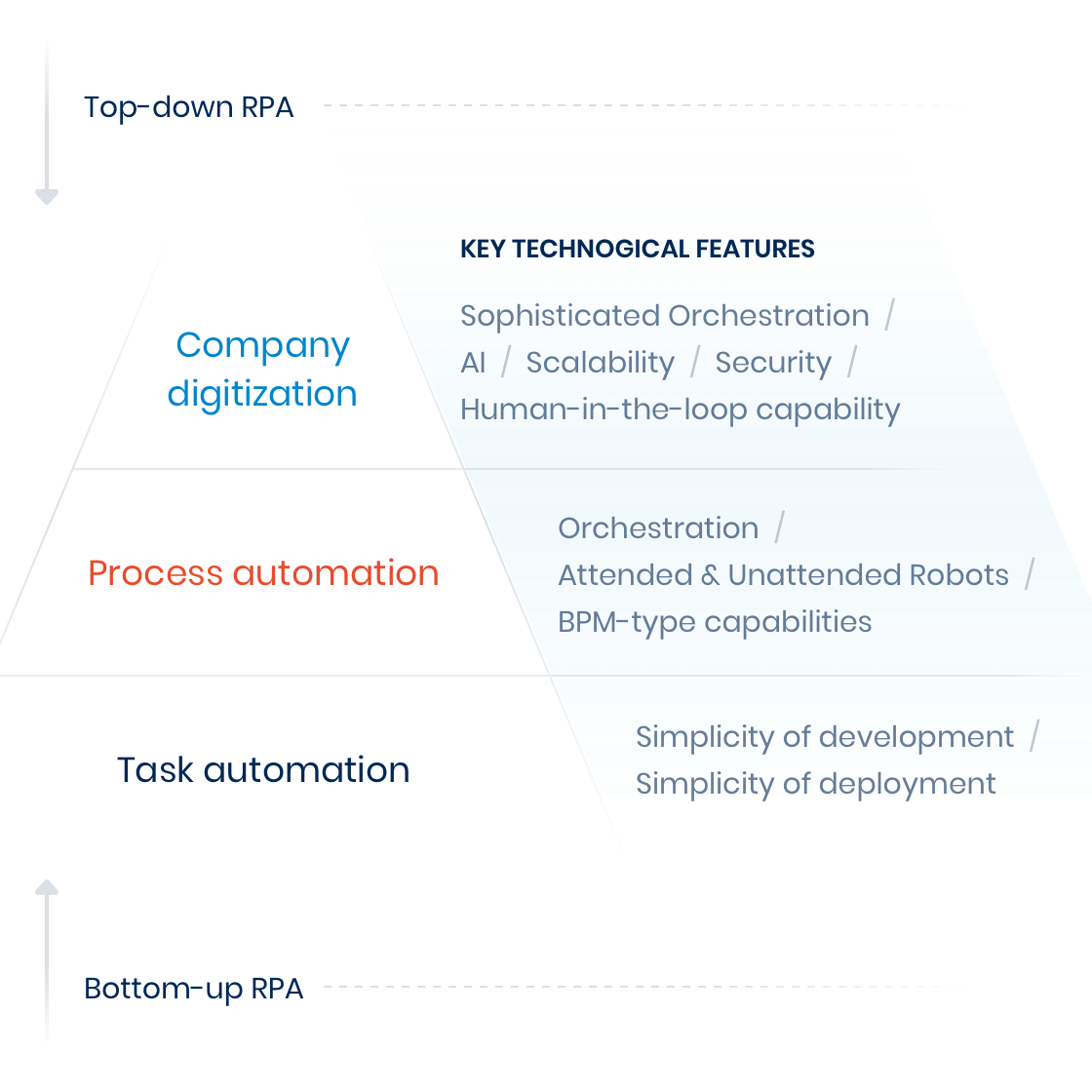 It is, of course, essential that a company has a strategic top-down approach to RPA as it is a key technology for any incumbent’s digitization journey. It is a technology that “pushes the envelope” on process redesign, enabling further process reengineering, thus requiring the top-down support of business owners at C-level. As such, an ambitious and well-coordinated RPA program allows companies to achieve substantial productivity improvements in the vicinity of 30 to 40% driven by significant execution time reduction, the 24/7 availability of the digital workforce and the elimination of errors.

But no matter how well thought through a top-down effort is, it cannot unearth alone all the automation opportunities. Many of them will be at the individual and task level. Only users themselves are aware of them, and they are the first ones to benefit from them. This is where enabling a bottom-up approach to automation becomes crucial.

Imagine indeed when thousands of white-collar workers are able to save as little as 10% of their time thanks to “personalized“ task automation. Not only is this a source of increased overall productivity but also a cause of increased job satisfaction.

Furthermore, allowing for the bottom-up adoption of automation is a powerful way to demystify automation and the fears that are associated with it. In other words, it can act as the best change management program for a companywide top-down automation program.

The operational challenge for organizations will then be that such top-down and bottom-up approaches do not conflict with each other or make matters even more complicated. Consequently, it becomes crucial that the technology used for both approaches is the same.

In reality, there is no clear-cut distinction between tasks and processes. Neither is there a clear distinction between processes triggered by a human and those that can be 100% automated, nor between the front office and back office processes. These are artificial divisions that have been imposed on organizations by limited technological solutions.

The full value proposition of RPA should not be restricted to creating personal task automation assistants or automating back-office processes. It should instead offer an all-encompassing way to efficiently connect front and back office functions while being intimately woven with human tasks, whichever those may be.

For full process automation, additional Business Process Management-like features would be desirable, as well as the versatility of having robots that can be triggered by humans when necessary and that can self-manage (in RPA speak: attended vs unattended).

Finally, an automation tool that is truly enterprise-ready must be highly scalable, with an “orchestration” capability of hundreds of thousands of robots, it must also be highly secure, and, last but not least, it should offer a simple way to integrate the best machine learning algorithms for cognitive decision making.

To conclude, I believe that full automation will happen through a combination of well thought through top-down initiatives complemented by a bottom-up approach. Both are needed for successful implementations, and companies should not be fearful of this approach nor deterred from it by the technological limitations of their RPA tool.

Please feel free to get in touch with us if you would like to deepen this conversation.