Note: All pull quotes included in this article were provided by respondents in our State of the RPA Developer Report 2020.

Despite the chaos of 2020, the global Robotic Process Automation (RPA) market is still on track to see double-digit growth from 2020 to 2021—19.5%, to $1.89 billion—according to a recent Gartner press release. You read that right.

If you weren’t already sold on the benefits of automation—better, faster processes; easier compliance; and healthier profit margins—that forecast may be the nudge that pushes you to commit. But it’s not enough to just sign up for a great automation platform (like UiPath 😉). You need to understand and support the people who make this technology possible: RPA developers.

“It’s the technology of the future.”

With the increase in demand for RPA has come a spike in the demand for automation skills (makes sense, right?). In fact, LinkedIn projects a 40% growth rate in postings for RPA engineers.

If you’re looking for great RPA developers to support your digital transformation, you’ll need to break down where these candidates come from, what kind of working environment they’re looking for, and what values they hold.

To make this easier, we spent some time surveying global RPA developers and rounded up our findings in the State of the RPA Developer Report 2020.

Our report looks at the responses from more than 1,500 RPA professionals, including RPA developers, managers, solution architects, specialists, and infrastructure engineers. These developers are truly global, coming from 84 countries, with the majority based in India, the United States (U.S.), and Japan.

Now, let’s take a look at the five things you need to understand about RPA developers to capture—and keep—the best automation talent around.

We don’t have to tell you that the 2019 novel coronavirus (COVID-19) has fundamentally changed how the world, and the businesses within it, work. As industries and employees alike continue to adapt to the new normal, job and economic stability will continue to be a top motivator for RPA developers.

“I wanted a career that would last,” said one survey respondent. “RPA was my preferred technology, because it matched my abilities and coding skills.”

This desire to find meaningful work that matters today and tomorrow has combined with the natural growth of the automation market to create the perfect storm of job potential.

Ninety percent of RPA developers say they expect the industry to expand over the next five years, echoing industry analyst sentiment and that demand for their skill sets will increase with it.

“RPA is the next big thing and with growth in digitization, I see a lot of scope and interesting and innovative things coming up.”

Furthermore, 70% of developers surveyed said they expect their organizations to hire more devs in the next year.

Here’s what this means for business leaders: RPA developers are in high demand as the market continues to expand, but they’re in it for the long haul. If you can dedicate your organization to becoming ‘automation first’ and focus on providing competitive pay and great culture, you can capture RPA developers who will help you lay the foundation for success for years to come.

2. Nearly all RPA developers are satisfied with their jobs

Thankfully, as the need for automation skills increases, so does job satisfaction, as more and more people take on meaningful, challenging work as RPA developers. In fact, we were delighted to see that nearly all (96%) of the RPA developers surveyed said they were satisfied with their jobs, and more than half said they were “very satisfied.”

That’s extraordinary, especially when you consider that, according to a recent Workforce 2020 survey, only 30% of North American and 41% of European workers were satisfied.

So what kind of work is responsible for this high job satisfaction? Well, RPA developers said they enjoyed their jobs most when doing the following work:

These kinds of collaborative, creative, and high-value tasks led to 80% of respondents feeling challenged and valued at work. Developers surveyed also felt that they were building skills within a large, global community, too.

“I love helping our teams and people to save time by improving their ways of working.”

Here’s what this means for business leaders: When you invest in and hire RPA developers to support your digital transformation, you enjoy a double whammy of value-boosting—less money lost to unsatisfied employees and more money saved due to better in-house capabilities that support automation ROI. However, while job satisfaction is high, leaders should be aware of frustrations that stem from missing documentation and information and overly complex or suboptimal processes. 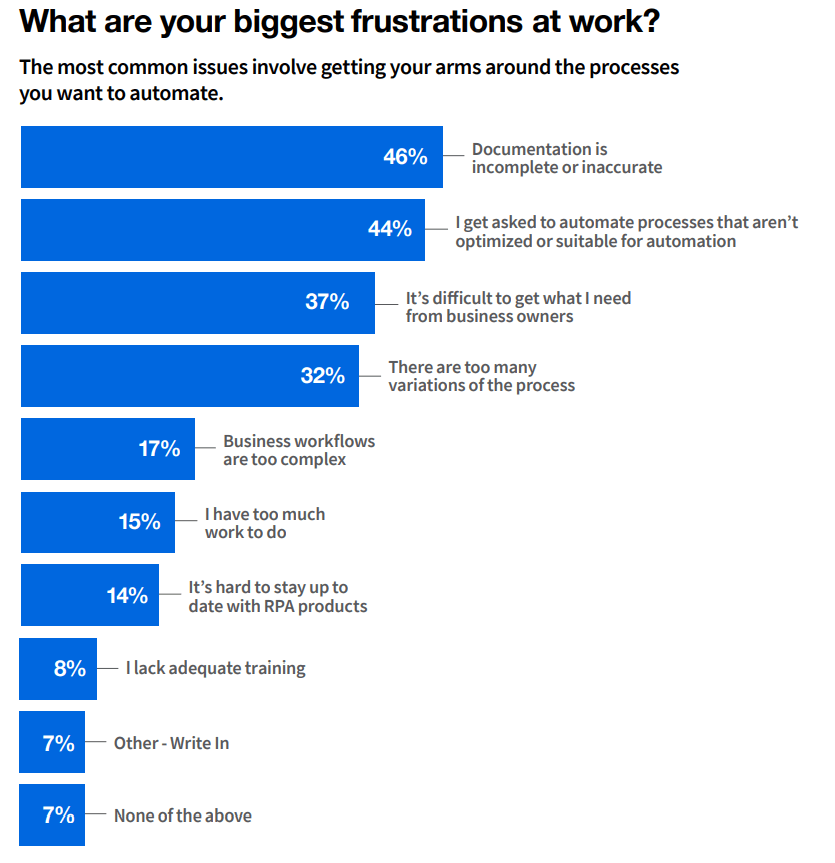 To sustain high job satisfaction and avoid frustration, business leaders need to ensure that they’re providing a culture that prioritizes skill building among all employees.

Or, as one survey respondent said, “It’s really important to have a corporate environment where you can learn and develop your skills.”

At this point, it’s no secret that automation is here to stay—and grow—globally, and developers know this as well as business leaders. This means many RPA developers, about 51%, are open to the next great opportunity to contribute to an automation first enterprise.

“RPA is one of the growing industries in the world...there will be more opportunities and demand for the role of RPA developer in the future.”

As we’ve said, RPA developers are looking for careers that last, where they can do work that has a meaningful, high-value impact on the companies they work for. Most of the developers we surveyed already bring RPA certifications to the table (and 96% of them received their certification from the UiPath Academy). 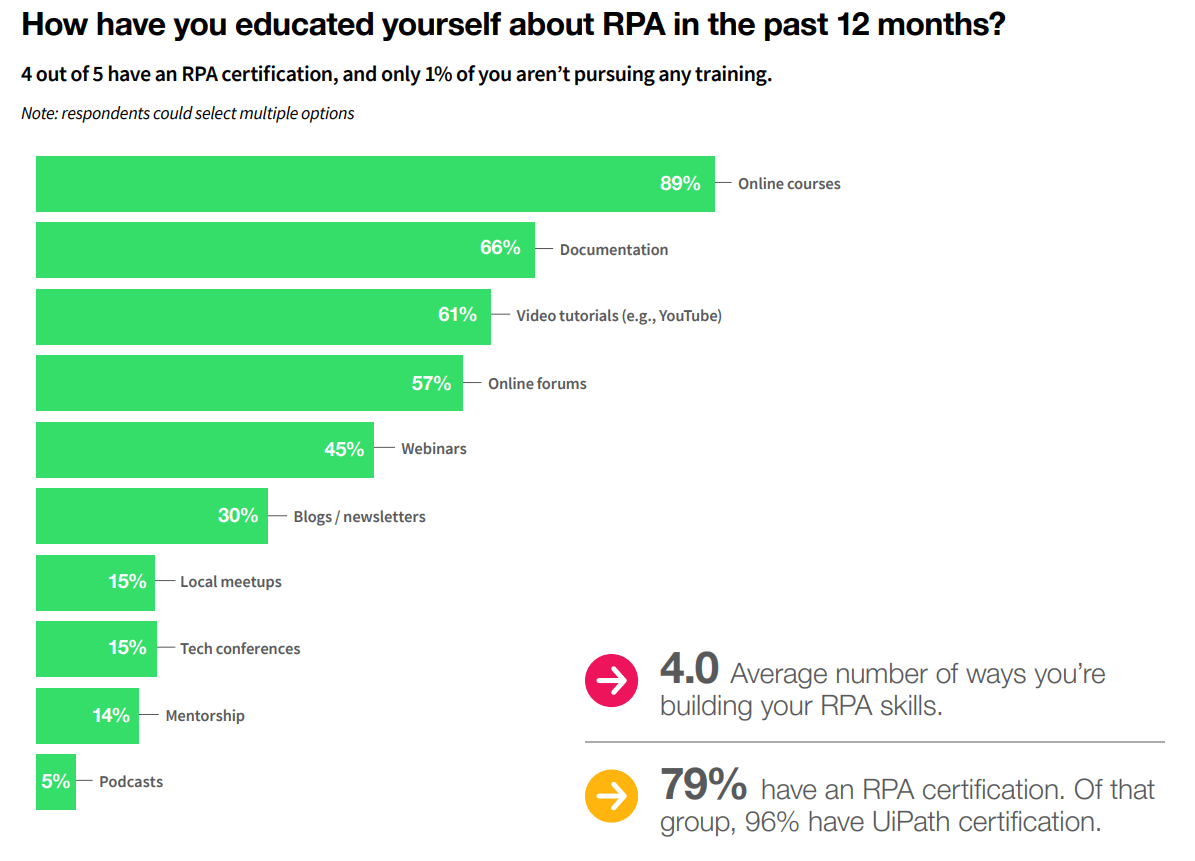 Additionally, most of the developers surveyed said they came from engineering and computer science backgrounds. We also found that people within this talent pool most often know at least one programming language already, with SQL, VB/VBA, and .NET being the most common.

Beyond their readiness to fill current skill-set needs, many developers told us they were actively working to build on the skills from previous experience to fill the needs of future automation jobs, too. This includes investing in education around machine learning (ML), data science, and artificial intelligence (AI).

Here’s what this means for business leaders: When you’re ready to expand and add new automation functionality, the talent pool is primed and ready. To retain this talent once they’re in the door, make sure to prioritize opportunities for continued education and upskilling with new technologies.

4. The needs and experiences of RPA developers vary by region, position

Building a sustainable workforce culture and corporate future in the new normal requires that business leaders take a step back and understand the global workforce that’s available to them.

This is particularly true of RPA developers, who come from diverse professional backgrounds and regions, both of which impact their experiences and values. Below, we’ll break down the differences we saw between geographic regions included in our survey and the variations in experiences between in-house and consulting employees.

When developers looked for new work, more respondents in Asia used recruiters (25% in Asia vs. 17% in the U.S. and 14% in the EU) to help them find employment, while more developers in the U.S. and the EU got into RPA roles via internal transfers (35% and 30%, respectively, compared with 20% in Asia).

Finally, we saw indications that it’s easiest to find new automation talent in Asia, with 43% of respondents in the region reporting they were looking for a new RPA opportunity.

Here’s what this means for business leaders: RPA talent is truly global, and there are qualified and hard-working people ready to fill your automation needs no matter where your company is based. If you’re looking at hiring candidates in the U.S. or Asia, make sure to emphasize competitive benefits. Additionally, if you’re expanding your automation workforce and want to hire developers in Asia, recruiters may be your best bet, while new RPA talent can be found in-house if you have offices in the U.S. and the EU. Finally, survey results indicate that if you’re looking to hire more developers quickly and support global work, you may find the highest number of interested candidates in Asia.

According to our survey, 39% of RPA developers work with companies through a consulting firm.

Although working with in-house developers versus consultants has its own pros and cons, we took a look at how job satisfaction, enjoyment of basic job tasks, outlook on the RPA industry, and job experience varied between the two categories.

Here’s what we found.

In-house RPA developers were slightly more likely to be “highly satisfied” (53% vs. 47%) than their consultant peers. They are also more optimistic about the growth potential for automation over the next five years (62% said they strongly agreed that it would expand vs. 53% of consultants).

Here’s what this means for business leaders: If you have the time to build up internal RPA developer talent, survey results indicate those employees are more likely to feel highly satisfied by their work and enjoy building and testing automations. And they may come out with a better outlook on the potential of RPA. In-house developers are great, but consultants are well prepared and a good option if you need to build up a team fast up front.

We’ve written at length about all of the ways COVID-19 has boosted demand for automation technologies (and why RPA and AI are the keys to business leaders preparing for and thriving in a post-COVID-19 world). We won’t rehash all of that here but suffice it to say that RPA developers have felt the increased demand for their skills in the new normal.

Changes in the global workforce—and how we all do work—have caused 55% of survey respondents to work harder, with developers in Asia reporting the biggest jump in this number.

COVID-19 has caused companies to take a new look at how automation can be used to streamline their operations. As a result, more and more companies have embraced remote work to better protect their employees and shield operations from future disruption. This means more projects for developers. Additionally, 38% of developers who said they were working more attributed it to figuring out how to work productively from home and achieve a good balance between work and life.

However, while developers are, like the rest of us, still finding their footing in the new normal, 71% say feel either no change or more confident in their job security.

Tap into the global RPA industry with UiPath today

RPA developers are in high demand, and the need is only growing greater. While there’s a deep pool of great automation talent out there, companies must invest in the culture and benefits necessary to attract and keep RPA developers. Doing so will not only increase job satisfaction among these coveted employees but also ensure smooth scaling of automation tools for years to come.

If you’re looking to get some more insight into the global RPA developer community—and find out how you can better tap into this growing talent pool—check out our full State of the RPA Developer Report 2020.

Then, when you’re ready, UiPath can help you train the wealth of automation talent available to you.