Seth Catalli is an enterprise sales leader at UiPath.

Editor’s note: This is the second post in a three-part series. Start the series by reading Benefits of an Automation Operating Model (Part 1).

Part two (this article) of this series focuses on how the automation executive sponsor and the different executing functions (highlighted in the graphic below) work together as a team to achieve value from Robotic Process Automation (RPA) at scale.

The benefit for business units and IT to have an automation operating model is to strike the right balance between innovation and control. In theory, standardizing a business process to create efficiency, cost effectiveness, and reuse across markets and regions would be supported by every employee. However, regional market leaders in the company may also have a focus on speed, agility, and more specific business results as they navigate the unpredictable realities of their local markets.

The early stages of an RPA program, from starting to scaling, are the critical inflection points when the scope accelerates from departmental to the entire organization. Previously, I shared the program characteristics for driving automation success across the four stages of the automation maturity spectrum:

Hiring the right talent and having the appropriate sponsorship at each stage of your automation program is important for success.

From my experience, there are different types of executive sponsors needed to move from stage to stage as shown in the figure below. An automation operating model allows those sponsors to be most effective because there is role clarity and a clear process for different parts of the organization to work together.

The mobilizer: Sponsoring the move from prove to establish

The prove stage of an automation program offers a great opportunity to incubate automation ideas and gain momentum with business champions by piloting a new way of operating. At this stage, it is critical to prove value for the project enthusiasts who are sponsoring the RPA pilot. Value realization at the prove stage compels the company to invest further and establish an automation capability for the company.

Those early stages of discovering the value of RPA can be goosebumps inducing as was the case at the insurance company American Fidelity. “As soon as I saw the RPA demo, I realized two things: first, if that’s real, that’s going to change everything, and second, there were so many ways that RPA could help our company,” said Shane Jason Mock, vice president of Research and Development.

“It took us less than a week to create our first automation, which resulted in a single UiPath robot successfully moving data from the mainframe to a spreadsheet as an audit of the human work. In fact, the employee who had been responsible for this task told us that he actually had goosebumps watching the new process work.”

The project enthusiast who helps to get the prove stage started typically needs to partner with what I call a ‘mobilizer’ – the business champion who is critical to the establishment of an automation Center of Excellence (CoE). The term ‘mobilizer’ describes someone that can effectively explain the value of automation to other business units, recruit talent to the RPA team, and attracting the initial funding.

The mobilizer needs to be an influential executive (e.g. head of global process excellence) that can evangelize the full automation potential for the company to justify investment into a CoE—and justify the CoE investment over competing priorities.

The progression to the establish stage is important because it builds the foundation of talent and a centralized function that will deliver RPA to the organization. The graphic below describes the roles that typically make up a centralized CoE. 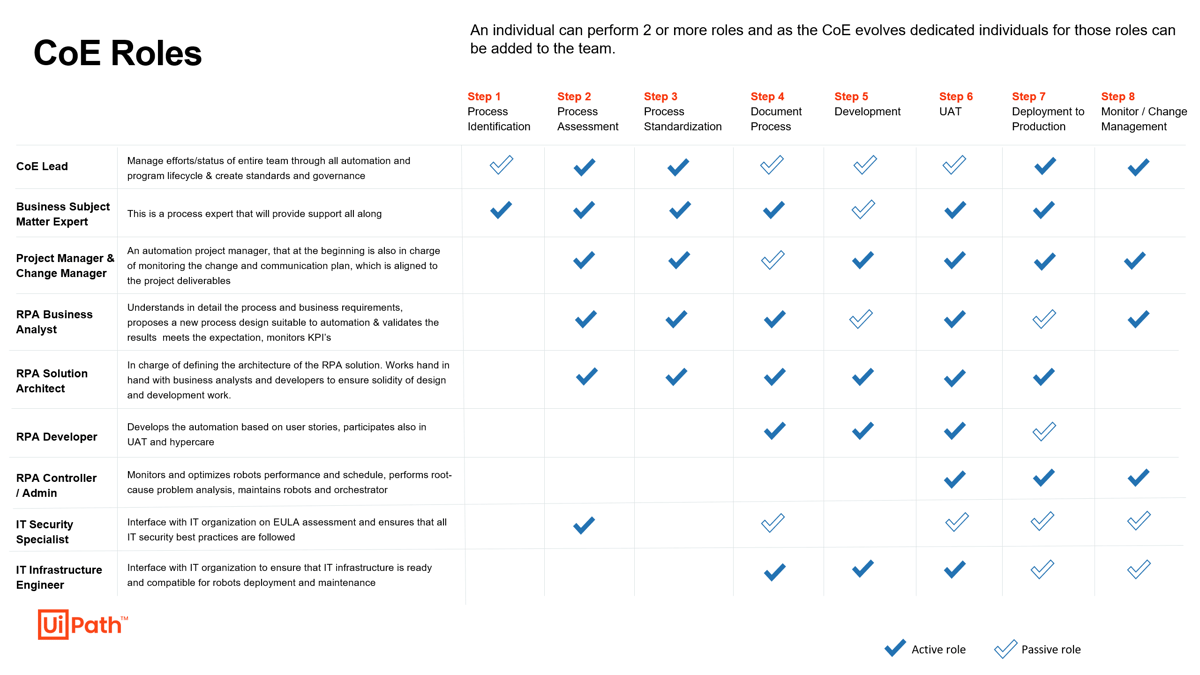 In practice, these roles will be embodied by a few people in the early days prior to becoming distinct positions. It’s important to note that while the list may seem a bit daunting, these aren’t necessarily new hires. They can be existing roles within the organization that are typically brought together under the umbrella of a CoE or leveraged from other pre-existing teams.

The centralized CoE is critical for solving some important problems at the beginning of the establish stage. Prior to the formation of a CoE, each process was being built as a separate automation project, which is expensive and results in inconsistent quality or practices.

By centralizing the skill sets and building consistent practices, such as the eight-step process in the diagram above, the CoE improves the quality and lowers the cost to deliver automation. The CoE also is typically best positioned to centralize the procurement of automation software and administer the licenses.

As the automation program matures in the establish stage, though, the autonomy needed by local market leaders and business units can become a point of friction with the centralized CoE if not handled with a consistent framework. This is where a CoE starts to struggle without the right executive sponsor who can establish a global steering committee and support the CoE with a mature operational model for automation.

To exit the establish phase, you will want to have a strategy of which program elements to federate – meaning that the business units have the autonomy to control their own destiny (note: part three of this series will address this in detail). This takes a different type of automation executive sponsor to ensure participation, enforce governance, and consolidate funding from different parts of the company and regional markets.

The digital steward: Sponsoring the move from establish to expand

The type of sponsor that is needed to successfully move beyond the establish stage is what I call a ‘digital steward.’ The digital steward understands global business processes that cut across business units. They are:

The digital steward is an opinion leader held in high esteem but can be from any line of business. This person is a direct report of the C-Suite (at a minimum) and is comfortable working with stakeholders globally.

While the mobilizer recruited talent and funding to the CoE for the centralization of RPA development, the digital steward goes a step further to recruit influential executives to the steering committee.

The automation fast-track: Accelerating the move straight to expand

Earlier in this article, I introduced the story of American Fidelity and the pilot they completed in the prove stage of automation that induced goose-bumps when their team first saw it. The story does not end there. That initial excitement led to RPA playing a key role in enabling a new digital business model for serving customers.

“The robots allow us to create that boutique, customized experience, unique to every customer - at scale. The robots have enabled us to become more personalized with each customer. We would never attempt this with a team of humans – it would simply take too much time,” said Mock.

Today, I see many customers address automation more ambitiously from the beginning as part of an enterprise-wide digital transformation to create a competitive advantage.

These companies have a few things in common that allowed them to accelerate to the expand stage:

The next (and final) article in this series will detail the actions and decision taken in the expand stage to achieve full scale. The expand stage is a critical juncture where initial interest from the C-suite could either fade or be bolstered, depending on how well the automation program ties to broader transformation goals.

The expand stage is typically marked by not only using professional developers to move into more complex processes, but the introduction of citizen development for individual automation.

Part three of the series will address how to expand the automation producers by cultivating citizen developers, a key to scaling automation. The ultimate goal of scale is to evolve the automation operating model to a framework for company-wide digital innovation.