As with any new technology, automation can cause some fear in your organization. Will software robots take jobs? Will automation increase unemployment? What does the future hold?

The research is optimistic.

The World Economic Forum shows that automation will create 60 million net new jobs. These new jobs, as well as existing ones, will benefit from the availability of software robots that can handle repetitive tasks, freeing humans to do more creative work.


Additionally, a Deloitte Global report on Robotic Process Automation (RPA) found that 50% of mundane work is suitable for automation, which will make work easier for millions of employees.

Yet, facts won’t allay fears on their own. Success with automation depends on showing employees how automation will make their lives easier and empowering employees to embrace a future assisted by software robots. Challenges are inevitable, but a strong company culture and the sustained belief of your workforce are what will enable you to last.

In this article, we explore five cultural best practices that will set your organization up for success.

Employees may worry that they will be replaced by robots and, in the long term, won’t have or get the right skills to thrive in the future of work. Counter to that assumption, The Economist Intelligence Unit reports that 79% of CEOs believe automation is most effective when it complements humans, not when it replaces them.

Automation is augmentation, not replacement

Shifting to this mindset requires that companies couple their technology deployments with an empathetic, human-centered change-management program.

Empathize with the danger that change can appear to pose. Robots can do things humans can’t do, so your change-management program has to show employees how this disruption will improve their working lives.

"This is a paradigm shift in the ways that we work. . . . I think it’s part of the messaging and how we take this message forward, in telling people we’re empowering you, we’re reskilling you, retooling you.”

— Abe Khaleeli, head of PMO and the intelligent automation practice at SiriusXM/Pandora

Demonstrate an alternative mindset that focuses on reaching goals via robot–human collaboration. Empower employees to face these changes and relish the opportunity to contribute to transformation. Software robots are there to make life easier for your employees, but their participation depends on the ability to see that.

As RPA makes your organization more flexible, your employees will also get the space to work on higher-order problems while robots complete repetitive, tedious work. The advantages of this freed capacity flourish when employees focus on the outcomes they can achieve with robots.

Max Healthcare, for example, one of the largest hospital networks in North India, struggled to manually process large volumes of patient transactions. After adopting the UiPath Enterprise RPA Platform, the network was able to not only streamline these processes but also accelerate the digital transformation journey.

Once they shifted from solving the problem of slow, inefficient processes, Max Healthcare could see that robots created solutions that weren’t humanly possible before. The ability to reconcile their data sources enabled the network to estimate when tasks would be done and what support would be needed, leading to much more accurate planning.

A human-centered change-management process emphasized the tangible benefits of this transformation. The employees at Max Healthcare not only got more done but were able to plan further ahead as well.

When you communicate about upcoming changes, return to the end goal. Your organization isn’t adopting a tool—you’re treating real pain points.

The amount of engagement your organization’s leaders have with automation plays a key role in cultivating an automation first mindset.

When automation first emerges, an RPA leader from the business side typically owns automation. They’ll design a proof of concept (POC) and involve different employees as necessary.

As automation matures and RPA scales beyond the pilot, the business and IT units will share ownership. This transition is necessary to standardize the process of designing, testing, and distributing software robots. 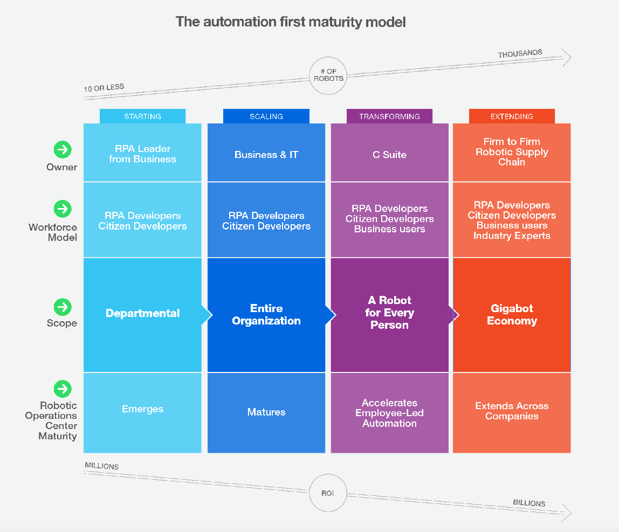 The next phase of growth requires the support of the C-suite. During the previous stages, automation is largely trapped within each department. With the C-suite on board and progress toward scaling automation a key metric for their success, they can break down the barriers between departments. Once automation can flow across departments, your organization can begin to transform.

The better leadership understands automation and the benefits it offers, the more they’ll prioritize its acceleration.

“We showed [executives] the benefits. They were able to see the success that’s actually kind of touch and feel. We had ‘aha’ moments.”

— Abe Khaleeli, head of PMO and the intelligent automation practice at SiriusXM/Pandora

Show C-suite executives the POC that seeded RPA in your organization. Explain the benefits it created, and demonstrate how those benefits can scale. A well-produced demo video is often the best way to vividly demonstrate the improvements RPA offers and make the case for how automation can save money, reduce risk, ensure compliance, and further organizational goals.

With an automation first mindset, leaders can encourage the embrace of automation across the organization.

Leadership is key to breaking down silos

Once leaders consider automation a high priority and a means to further strategic goals, that prioritization can spread across the organization.

3. Build a bridge between IT and business stakeholders

The Economist Intelligence Unit reports that 46% of CEOs consider it a best practice to include both IT and heads of business at the beginning of the automation journey.

Keeping IT and business units separate isolates solutions and problems


Business units have useful insights into their processes and the problems these units are trying to solve. Their on-the-ground perspectives aren’t replaceable. IT provides the infrastructure and governance procedures to make automation solutions viable.

Only together, and with the support of their leadership, will business and IT be able to regularly discover opportunities and build suitable robot deployments.

Once business and IT stakeholders are working together, they can build pipelines, connect silos, and facilitate the design and maintenance of a successful robotic Center of Excellence (CoE). A mature CoE will encourage and enable wider participation in organizational transformation.

Everyone is a leader to some degree, and everyone has a perspective worth sharing. With robots available to everyone, each employee will be armed to solve problems that previously would have been intractable.

You can encourage this sense of ownership in numerous ways, such as allowing employees to name the robots, as Tarsus Distribution did with Betsy the software robot (and eventually Betsy 2, 3, and 4). “Betsy is my bestie,” one Tarsus employee told Tim Proome, distribution supply chain executive at Tarsus.

Every employee can see problems and ask if robots can help. Finding RPA use cases can become an organization-wide effort. Business and IT can work together to prioritize processes with the highest return on investment (ROI) and figure out implementation.

The more automation advocates your organization has, the more you can distribute optimism toward new ways of working.

How much untapped potential is your workforce not utilizing? Before automation, this was an idle question—even when companies understood their true potential, they lacked the resources to maximize it.

With RPA scaled, you can finally begin to tap the true potential of your organization

That potential, however, relies on organization-wide awareness and engagement. The more you can promote tangible results, the more excitement you can build.

For many employees, ROI and productivity improvements will be too abstract to garner excitement. Instead, discover and communicate what benefit each team will get with the availability of software robots. The goal is to create awareness and then move employees from knowing about automation to being excited about it.

As awareness leads to excitement, abstract benefits lead to tangible benefits, and improvements to the organization lead to improvements in employees’ daily lives.

For example, Coca-Cola İçecek (CCI), a major bottler for Coca-Cola, built awareness via an RPA hackathon that included employees across different departments. During the hackathon, CCI explained the technology and its benefits. In the course of a day, CCI was able to engage employees in discussing their problems and then get a software robot up and running to address them.

Eventually, your organization’s relationship with software robots will become a feature that warrants mentioning everywhere it’s appropriate. Internal marketing and communication teams can make videos of employees, business partners, and customers sharing the benefits they noticed as robots took over the tedious aspects of their jobs. This will further soothe any fears and get other employees excited about using robots.

In the automation first era, it will even benefit you to start prioritizing automation in your recruitment. Marketing and employee onboarding staff should prioritize the fact that they’ll be working with robots. One of the surest signs your organization has transformed is that you’re attracting employees excited about automation from their first day of employment.

The Economist Intelligence Unit found that 88% of CEOs believe automation will accelerate human achievement, but 29.3% cited a lack of relevant talent and skills as a top challenge to scaling automation.

A system of continuous learning is the only way to get up to and maintain the speed necessary to meet the needs of the automation first era.

Your first step to building a system of continuous learning is documenting new knowledge as different people create it.

Automating one process often offers lessons for the next. If you don’t document the steps you took, including the stumbles, then you’ll have to start over every time. Good documentation helps your organization reduce duplicate work and boosts the speed of subsequent RPA deployments.

Your CoE can act as a guide that makes this documentation actionable. The CoE centralizes the best practices your teams learn and stores templates that your teams can use to deploy robots faster.

Your sources of knowledge aren’t limited to internal lessons.

If you join the large and rapidly growing RPA Community, you can learn from RPA developers and businesses across the world. The more you can encourage your employees to engage in these communities, the more you can leverage the knowledge of the entire industry.

At UiPath, we consider the democratization of robots an essential part of the automation first era. We offer numerous ways for those curious about RPA to find free training sessions, troubleshoot with fellow users, and garner lessons from a variety of different experiences. UiPath Go! offers a marketplace for automations, and UiPath Connect! is a network where developers can connect.

Related read: Your Right to Robots: Wait Less, Forge the Future of Education, and Improve Your Local Economy

The key to building a continuous learning system that lasts is to create goals that supersede any single technology. As robots free your employees from tedious work, your organization has the chance to encourage employees to use that time for self-development. When they do, reward employees who learn new skills. Leaders can set an example by committing to self-development too.

Automation gives your employees the chance to escape the day-to-day and see the bigger picture, the context their work exists in, and the goals it contributes to. With this freedom, they can improve the company by exercising previously underutilized skills or by learning new skills—RPA-related or not.

Automation first companies thrive with the support of a culture that embraces curiosity, problem-solving, and innovation. The overarching challenge is demonstrating that automation puts the human back inside the work.

The root of workplace alienation is work that’s mundane—work that requires humans to waste their creative energies on repetitive tasks. Counter to pessimistic assumptions, the addition of robots will humanize work by empowering humans.

A culture rooted in that principle is a culture that can adapt to the automation first era and the as-yet-unseen challenges that lie beyond it.

Translating these cultural principles into reality requires an operating model that leverages the full power of RPA. In an upcoming post, we’ll explore five operating best practices that make your potential realizable.