Evolution of the Future of Work: U.S. Edition

Evolution of the Future of Work: U.S. Edition

What we would give for a crystal ball (especially during 2020).

But, fortunately and unfortunately, hindsight is our best bet to figure out what the future holds. Thankfully, history tells a compelling story about what we used to think the future of work might look like.

Here, we look back on the past 30 years (🤯) of speculation about what the future of work was going to look like and how it actually played out. This post is about the United States (U.S.) in particular, but keep your eyes peeled for future editions covering historical predictions in different regions across the globe.

Work in the ’90s sizzled with tension. Thanks to attitude and value changes in the 1980s, American workers cruised into the decade with higher expectations for employee experience. They quickly began demanding that their employers pay more attention to work-life balance. People predicted a grassroots power shift between employees and their bosses, and some even braced for a full-blown coup of the American workplace. 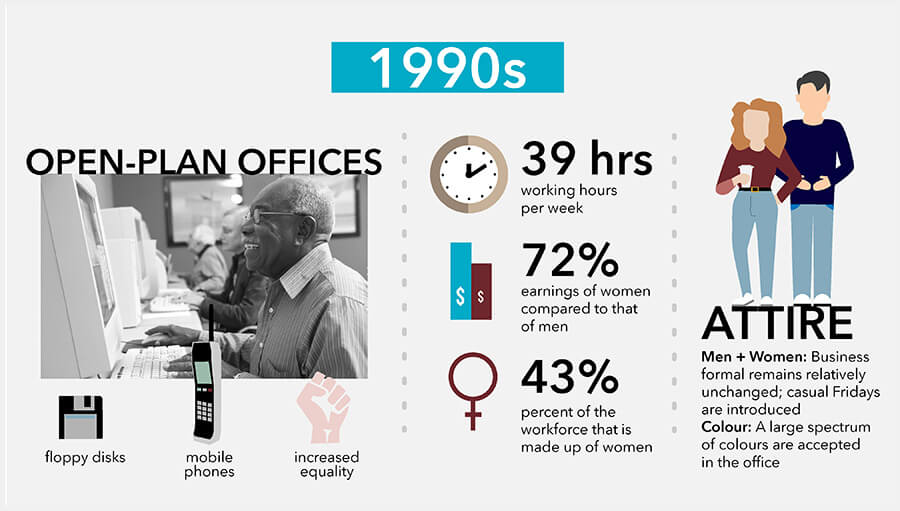 In reality, change was more drawn out than that, but not without some growing pains.

An article in the Los Angeles Times, published in January 1990, described the dynamic as “a shaky marriage, in which the partners go through a series of divorces and reconciliations until, after years, they finally overcome their bitterness and distrust.” (Yikes.) The same article pointed out that thanks to a shrinking pool of skilled labor, employees had some new bargaining chips to fight for material improvements. For example:

Simultaneously, advancement in technology spurred new questions about the future of work. The 1990s welcomed new technology, such as flip phones, email, the World Wide Web, and personal digital assistants (PDAs) into the workplace, making people wonder about the widespread ramifications:

So, what was it actually like working in the 1990s? Employees successfully applied pressure to companies, forcing them to focus on quality-of-life issues.

Companies began practicing open communication and considering work’s effect on personal life—they even started casual Friday! According to a 1993 New York Times article, companies that failed to embrace these changes saw “little but a view of the receding backs of their best people leaving for friendlier premises.” (Yikes again.)

As predicted, emerging technology also had an impact on the decade’s future of work. It became clear that technical skills would be more valuable (and challenging to find). These skills were even difficult to find among younger workers who, according to the New York Times, were “no more likely to be personally prepared to work in a racially and technically diverse environment than older workers.”

Surely enough, though, we forged ahead into the Internet Age, complete with new alternative workspaces, new time wasters, and new dot-com businesses. Soon, it became next to impossible to imagine the American workplace without web-based tools.

The 2000s were an absolute roller coaster for American workers (and they forgot to install an emergency brake). The decade kicked off with the dot-com bubble (which quickly burst) and culminated with the 2008 recession. On January 1, 2000, no one could have predicted what the decade would hold.

Some of the earliest predictions about the future of work were rather eerie. In 2003, for example, Accenture released a concept video called The Office of Tomorrow. It foreshadowed a future where employers could track their employees’ every move with geolocation.

All predictions weren’t so creepy, though. Some of the fear that people would be replaced by technology faded as we witnessed the beginnings of an internet-enabled future of work. By 1999, 2.5 million Americans made their living directly on the internet, and, by all accounts, that number was only set to skyrocket. Experts from Wired predicted the internet would become faster, more personalized, and easier to use: “With the Web following us around, we'll expect all our data to come with it.”

While most of their speculations were spot on, a significant speed bump—the dot-com bubble popping in March 2000—stole the spotlight at the beginning of the decade. Over investment followed by panic selling tanked the stock market. And despite years of strife over the economy, the internet survived.

From the ashes of the dot-com bubble, leading workplace technologies like Skype, the early iterations of the Google search engine, and Gmail began to emerge. These tools blew open possibilities for employee productivity, communication, and learning and sealed the deal: the internet was the future of work.

As the workplace adopted mobile technology, office life transformed to accommodate this new future of work. The 2000s saw the emergence of open-office floor plans (and, more importantly, the death of the cubicle) to facilitate collaboration and flexible working arrangements. Also, as emerging tech made tasks easier, some low-wage jobs were impacted: the number of admin jobs, for example, was reduced.

On the whole, though, the 2000s were a healthy, dynamic period for the American worker—it even saw the all-time peak of women in the U.S. workforce!

Then, the 2008 recession hit, and one in five employees lost their jobs. To this day, experts still can’t fully grasp the extent of the crash’s impact.

The end of the 2000s was the lowest point in the history of the American economy, and the work that supported it, since the Great Depression.

Like the 2000s, the 2010s started out in economic strife, thanks to the 2008 recession. During the first half of this decade, the outlook was pretty bleak because of the state of the economy. But by the latter half of the decade, predictions were becoming more positive, things were looking pretty good (at least economically), and technology continued to radically transform the future of work.

By the 2010s, we were strapped into light-speed digital transformation—the only question is how our work lives would evolve to keep up. Across the board, people were pretty certain smartphones and technology would continue to transform the future of work. Some experts also predicted a rise of nontraditional gigs, like freelancer, podcaster, influencer, and delivery driver. And despite some lingering fears about automation stealing jobs, experts also predicted artificial intelligence (AI) and automation would generate more jobs than they eliminated.

At the end of the decade, employment rates were at a near-record low, and a slew of new roles started popping up on job boards. Personal-device ownership also plateaued by 2016, a signal that internet-enabled tech had saturated the American workplace.

If you walked through an office (assuming the company in question even had a physical office), you’d see evidence of a new future of work: one that’s digitized, automated, and powered by the Internet of Things (IoT). A marketer might be using a software as a service (SaaS) platform to collaborate with a distributed team. A human resources (HR) employee might be conducting virtual interviews. A data analyst might be reviewing an automated data-processing report.

In any case, we were beelining toward a future of work where people used tech to automate tasks and free up time for strategy, design, and other human-powered initiatives.

The Roaring 2020s: Back to the future (of work) once again

Like the 2000s and 2010s before, the start of 2020 looked OK and then quickly took a turn for the worse. Many predictions from experts at the end of 2019 were pretty much null and void.

Before COVID-19, experts predicted more and more employees would enjoy flexible schedules, gig work, working from home, and self-employment. They also anticipated AI would continue to transform the way we worked: “The powers and abilities of machine intelligence are only growing. Tasks that we once thought uniquely human are quickly becoming doable by software.” 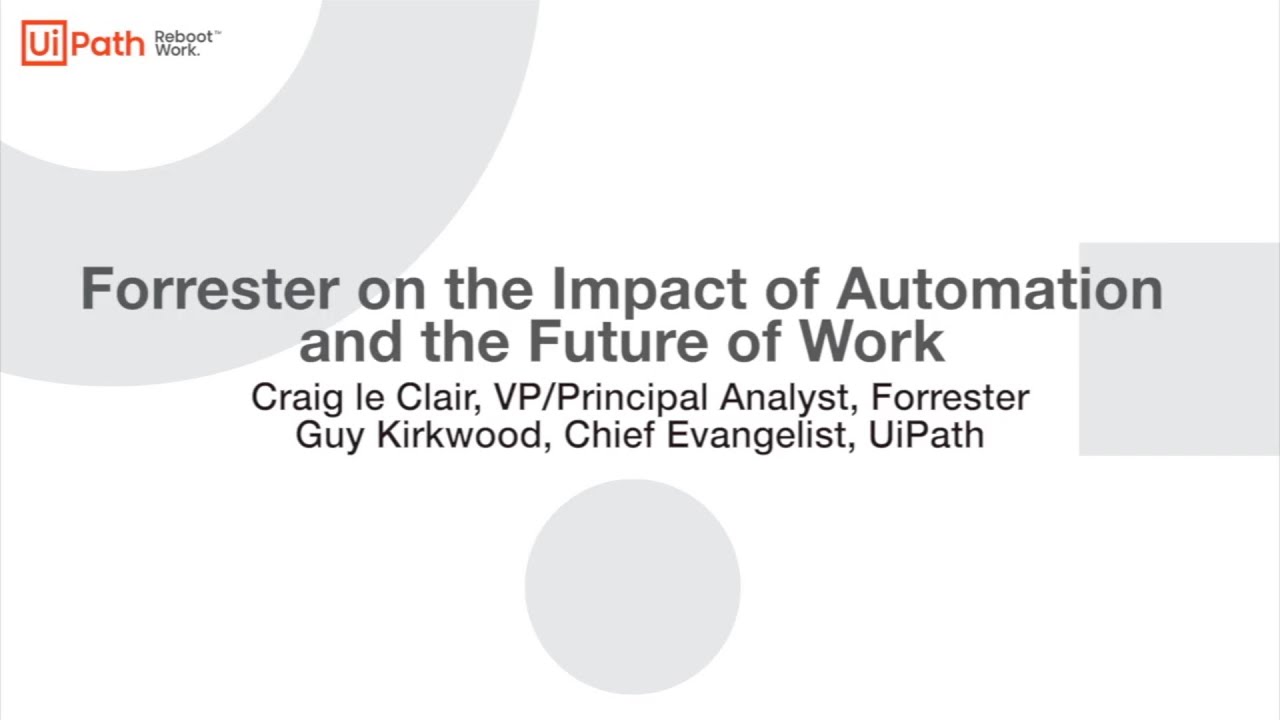 These days, most of those predictions still ring true, but for very different reasons. Over half of U.S. workers (56%) currently have a job that’s compatible with remote work and will continue being remote (at least partially) in 2021. This shift has sparked conversations about mental health, the quality of work experience, and the deconstruction of information silos for a more collaborative future of work.

Alongside employee expectations, the organizational structure is expected to change, too. In a June 2020 blog post, Gartner predicted nearly one-third (32%) of employers would replace full-time employees with contingent workers (e.g., freelance, contract, and agency) to cut costs. They also predicted companies would start collecting data from their employees to monitor productivity while working from home. Maybe Accenture was on to something, after all?

At a higher level, Forbes predicts companies will operate more like startups than enterprises, becoming lighter on their feet in pursuit of hypergrowth. Fortunately for employees, Forbes also anticipates these changes will give employees more opportunities to advance and specialize in their careers, gain ownership over their work and time, and make meaningful contributions to the organization.

No matter what the future of work looks like, UiPath is here to make it better

Really, the biggest lesson is that the only constant is change: nearly every decade for the past 30 years has transformed the way we work, often unexpectedly. Why should we pretend it’ll be any different going forward?

That’s why we’re focusing on building and improving an automation platform that will support the future of work—and the people doing that work—no matter what is looks like.

We've bundled our best resources on this topic for you:

Remember: this post is the first in a multipart series about the (past’s) future of work around the world, so keep a lookout for future installments.