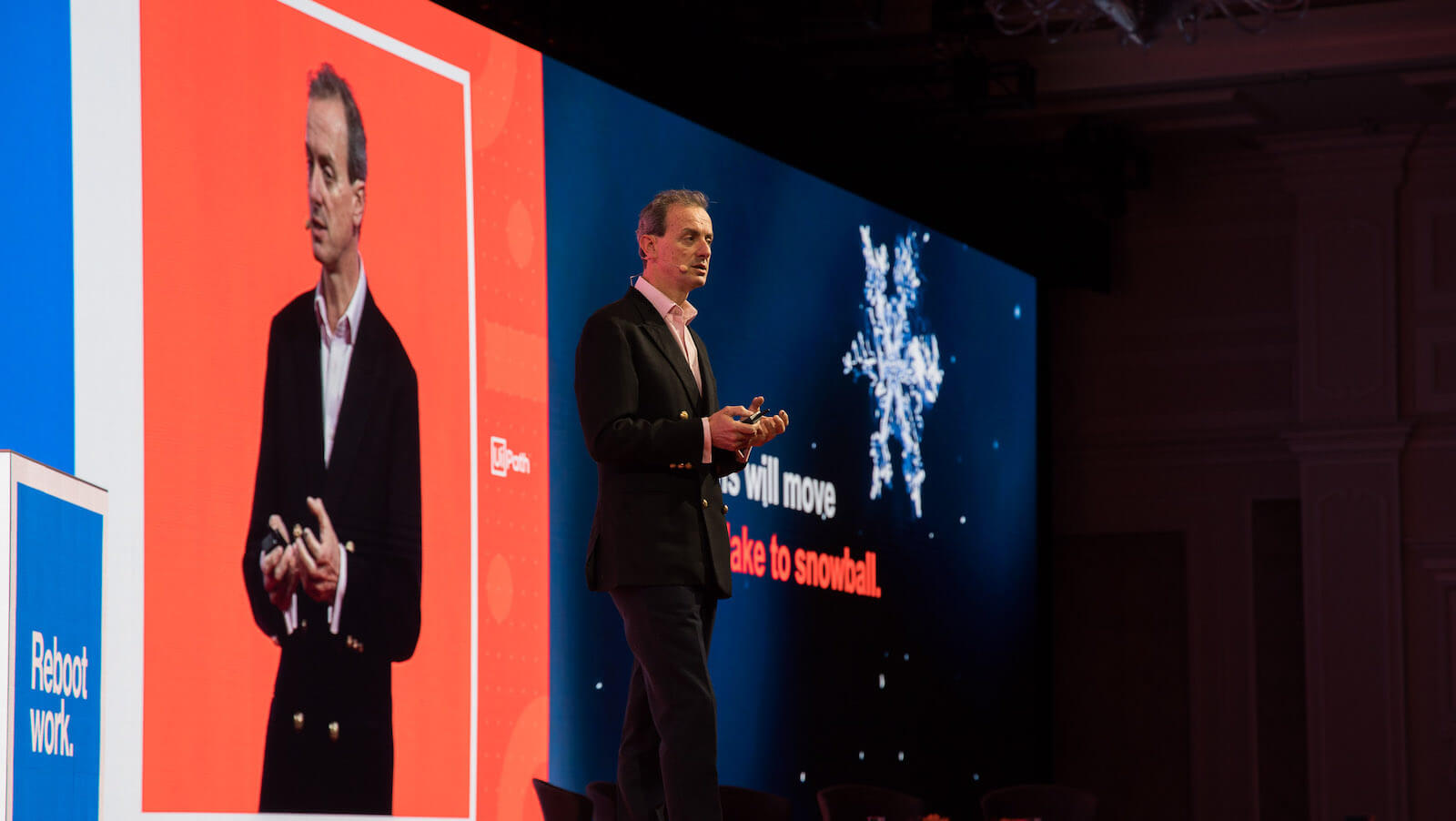 At FORWARD III, I made seven predictions about the advancement of Robotic Process Automation (RPA), artificial intelligence (AI), and the automation industry in 2020. This coming year will see a variety of big shifts as the RPA industry matures and as the global economy reacts and adapts to it.

Overall, the pace of RPA maturity will continue to accelerate. It’ll be spurred on by economic shifts, a new generation of workers, and the speed of technology advancement. Organizations will react by standardizing and scaling their automation, and enterprises will move to acquire and merge smaller RPA vendors to remain competitive.

Shifts both large and small will push the RPA industry to new levels, which will make an 'automation first' mindset a strategic imperative.

In 2018, I made six predictions about RPA, and in 2019, five out of six came true (and, arguably, the sixth prediction was partially true, too).

UiPath has seen tremendous adoption across all levels of governments in the United States. With 24 clients in late December of 2018, we have grown to an additional 31 federal agencies, two state governments (California and Ohio), a county, and an innovative city client. Our county, state, and federal clients were recognized with nine innovation awards in 2019. Governments with an automation first mindset are blazing the path to better citizen services. - Jim Walker, Director of Public Sector Marketing, UiPath

At FORWARD III I made seven predictions that ranged from the global to the technological.

1. The global economic downturn will encourage the adoption of automation 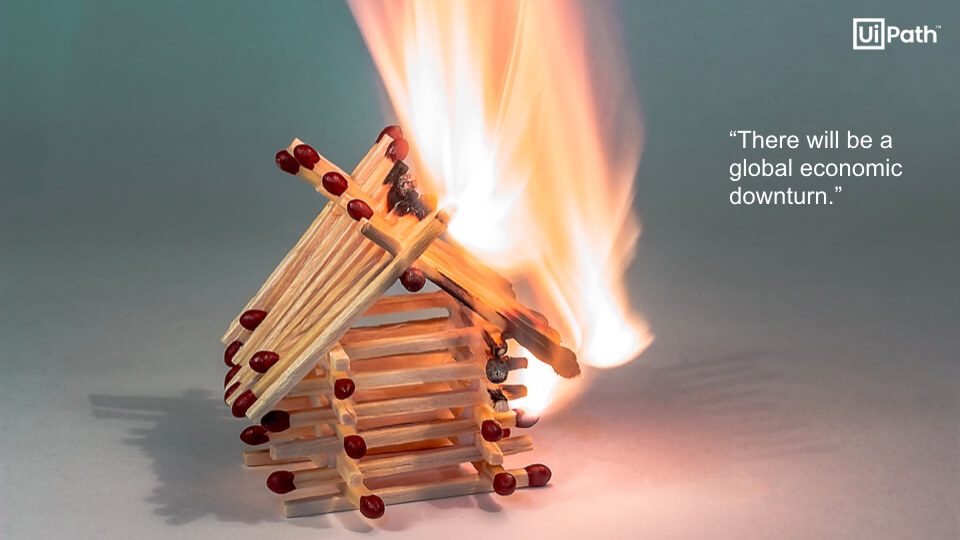 Signals from the financial market, which have proved predictive before, don’t paint an optimistic picture. The fall of long-term interest rates and the retraction of corporate investments reflect increasing instability from global tensions, conflicts, and trade wars. If consumer fear takes hold and demand collapses, we could be facing another recession.

Normally, organizations would lay off employees and struggle through, but automation is demonstrating new ways forward.

As organizations face the realities of working in an economic downturn, I predict they’ll adapt their business models with automation rather than lay off employees. Organizations understand that the investment they’ve made in their people will pay off if they can afford to retain them. With automation available, they can scale up robots rather than scale down human employees.

For organizations with an automation first mindset, the economic downturn is an opportunity to transform and benefit their businesses, their shareholders, and their employees. Once the economy bounces back, many organizations and employees may ultimately be better for it. 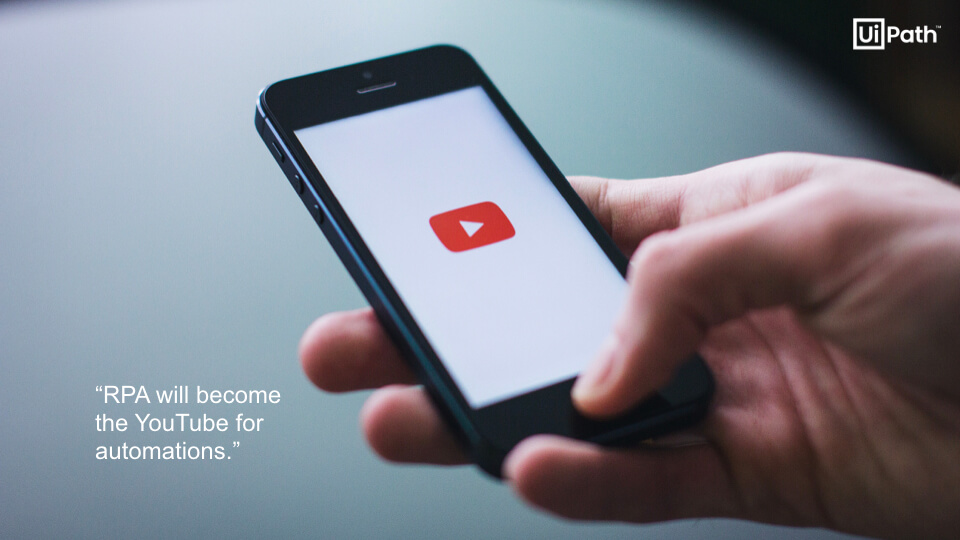 In 2020, RPA is going to claim its place as a central platform for other enterprise automation tools.

Ericsson, a networking and telecommunications company, is already planning on having a robot for every employee and building out the capability to support citizen developers. David Hunter, head of automation at Ericsson, said: “RPA will become the YouTube for automation.”

In other words, RPA will become the repository for automation in the same way that YouTube is a repository for video content. The centrality of RPA will run parallel with the development of automation code that is more useful and reusable, enabling it to spread even further than it previously has. The spread of this centralization and functionality will enable organizations to reuse code across industries and geographies.

This is the front end of an even longer-term trend as RPA gets more accessible and extensible. At UiPath, we’ve long made the UiPath Community Edition free and made knowledge more easily available via the UiPath Academy. New open-source RPA tools like Robin, developed by Softomotive, are similarly pointing the way to getting robots into more people’s hands. 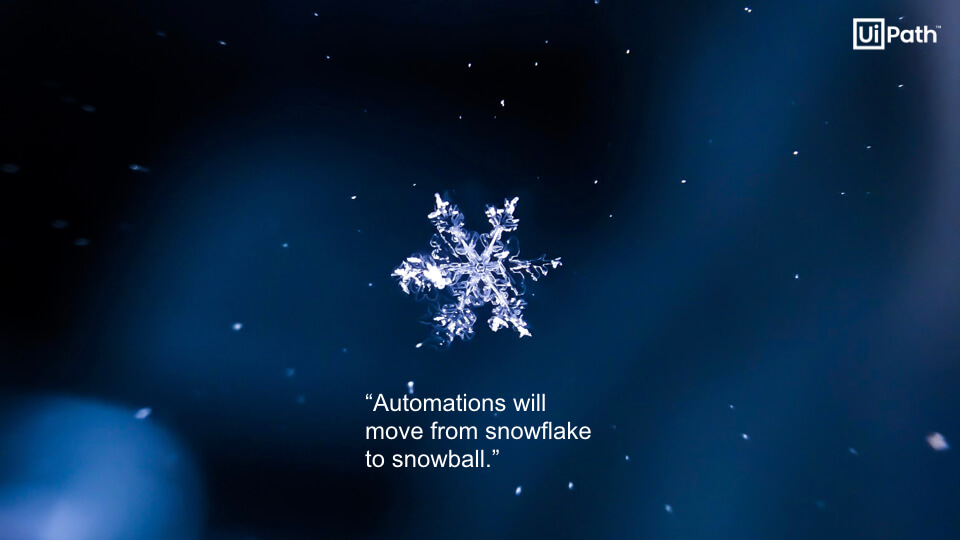 Organizations treat robots like they are  snowflakes. That’s what Chet Chambers, vice president and chief evangelist of the Americas at UiPath, has found. From this perspective, each automated process is a unique solution tied to a unique problem.

In 2020, organizations will learn how to better standardize those robots and apply them across use cases and departments, and eventually across companies and industries. Once you combine and standardize robots into reusable and repeatable elements, the snowflakes become so-called snowballs.

Snowballs need the material of snowflakes but have a momentum that makes them more powerful. These snowball robots resemble one another and are just as predictable across all industries and geographies. The process of turning these snowflakes into snowballs is something we’re increasingly going to see, and it’s going to result in more predictable deployments and easier scaling. 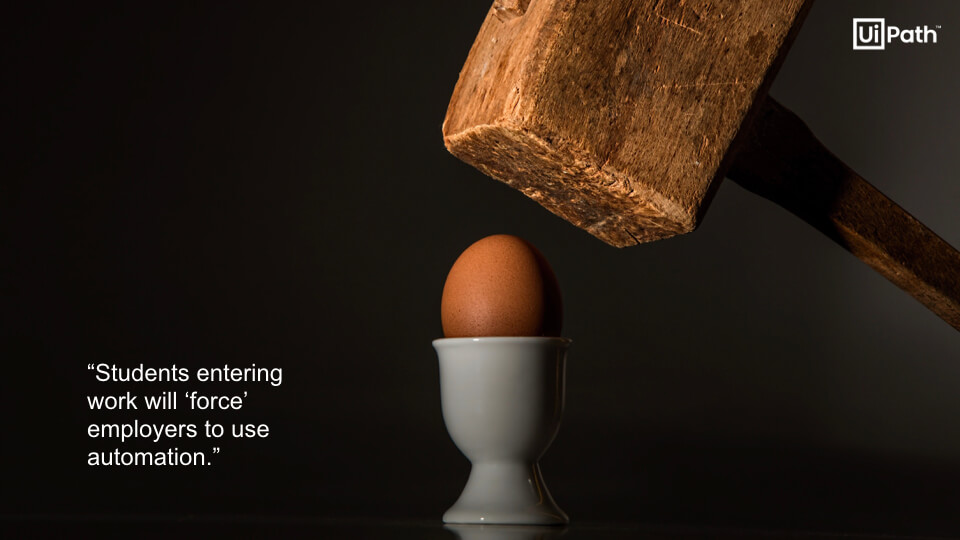 According to Ian Barkin, co-founder and chief strategy officer of Symphony Ventures, organizations inherit complexity as they grow. He compares analyzing these organizations to archeology, digging through layers of processes and systems that grew over time.

For most of business history, human employees have been stuck having to connect and integrate increasingly outdated technology systems via repetitive, manual work. In 2020, students entering the workforce will be familiar with better options and will force lagging businesses to transform their processes.

Students, new to these companies and these processes, won’t be as inured to “the way things are.” They’ll be asking why we’re doing the same things the same ways after all these years—and many organizations won’t have adequate answers.

Given the proclivity of students to learn automation in school, as evidenced by the UiPath Academic Alliance, students will start automating bits of their jobs. As these new employees get more efficient and effective, the now vivid benefits of RPA will outweigh any remaining hesitancy, compelling organization to change.

5. We’ll continue to be surprised by the intelligence of machines 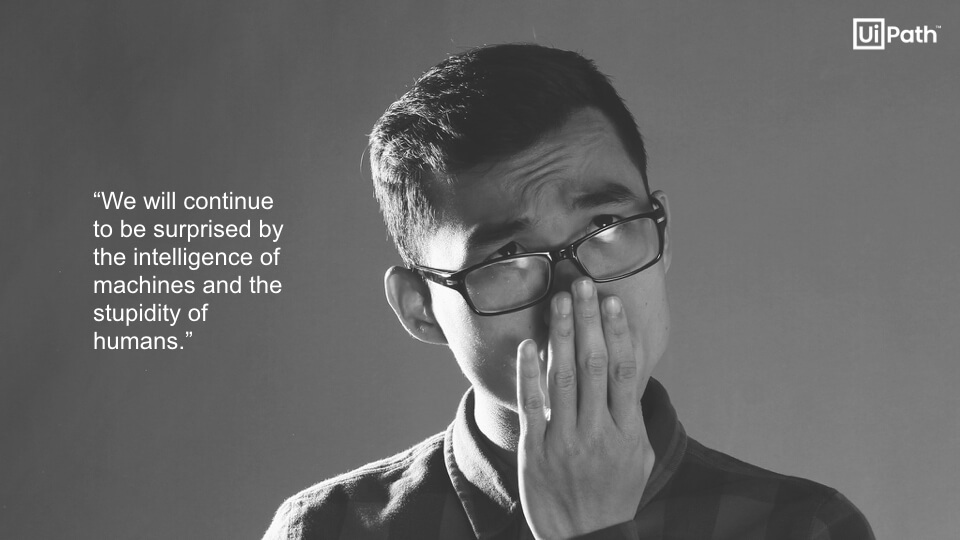 The powers and abilities of machine intelligence are only growing.

Tasks that we once thought uniquely human are quickly becoming doable by software. The growth of AI will remain exponential, similar to Moore’s law, and there will be plenty of surprises in store.

Even some of the most fundamental assumptions about AI are increasingly under question. Julie Shah, an associate professor at MIT, is pushing AI into possibilities via theories of linear temporal logic.

6. RPA will be a topic on the world stage 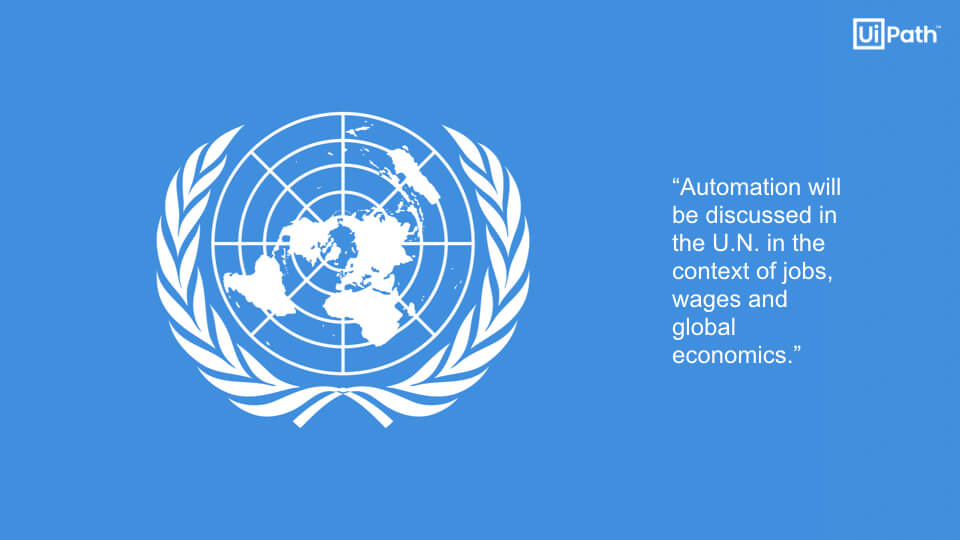 The impact of automation is proving to be societal in scope.

In 2020, extra-governmental organizations like the United Nations and the World Economic Forum will discuss RPA in the context of jobs, wages, and global economics. Automation is already having a massive impact on economies internal and external to individual countries.

Individual countries will also become increasingly interested in what effect automation will have on their societies. Prioritizing RPA in these socio-political contexts and policy discussions will only become more important if my first prediction proves correct, and robots become key players in the coming economic downturn.

7. Consolidation among RPA vendors and automation-led services companies will accelerate 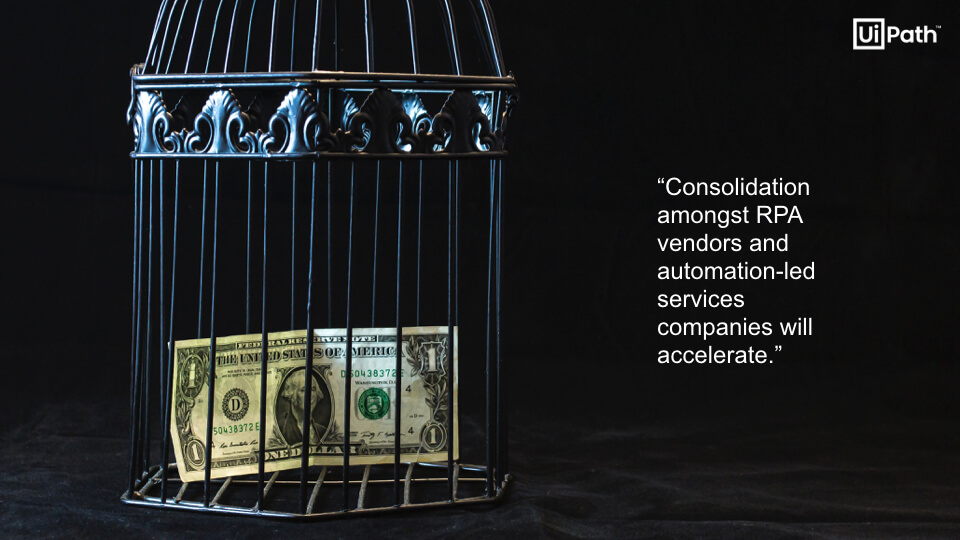 As larger, more established organizations move into the RPA market, they’re going to acquire and merge with upcoming RPA vendors.

The leaders identified by the Gartner Magic Quadrant for Robotic Process Automation Software, Forrester Wave, and Everest PEAK Matrix reports likely won’t face acquisitions because they are larger and more established. Enterprise entrants to the RPA market will instead acquire and merge with smaller organizations to compete with these leaders.

In 2020, the consolidation of these challenger companies across services and technology businesses will continue.

Preparing for 2020 and beyond 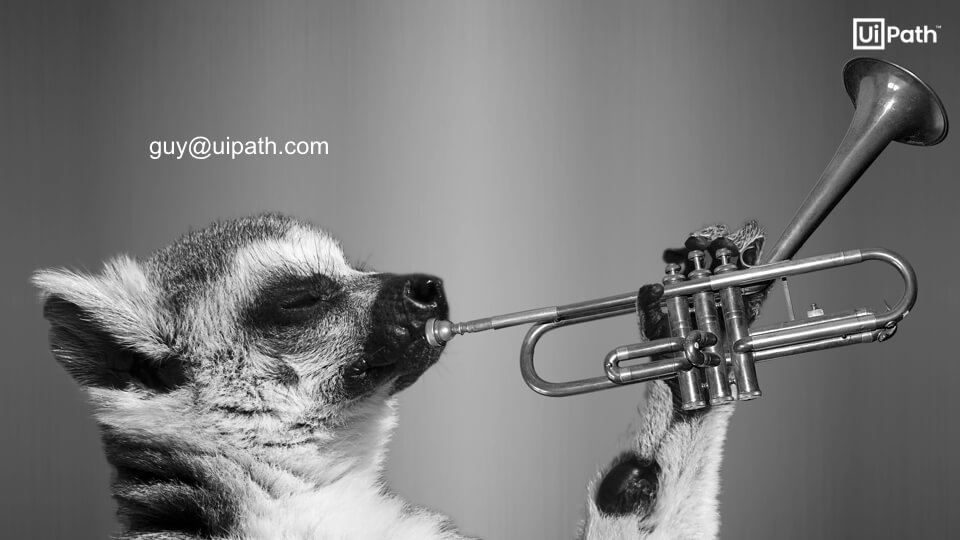 While it's hard to keep up with the advancement of RPA and AI, having insight into these trends can give you an important advantage.

The scale of RPA’s effects and the intricacies of its abilities means advancement will be exponential. Developing a digital transformation strategy that centers an automation first mindset is increasingly becoming a necessity for future survival.

I can predict some of the changes 2020 will bring, but only the innovative can react, adapt, and lead.


Didn’t get the chance to see every speaker and event at FORWARD III? Sign up for the FORWARD III event pack to get presentations right to your inbox.