The title of this blog may be a rhetorical question, but it does sum up the range of reactions to the increasing impact of robotic process automation technology on business process and BPO discussions. When you see a statement from the Everest Group that “Robotic automation tools are up to 65% less expensive than offshore-based FTE’s”, it’s hard not to get excited. Then, when you come to provider sites like ours and see features like screen and web scraping, it can seem a bit underwhelming. What are you really seeing – innovation or a warmed up rehash of old technology?

A good first step toward answering that question is defining robotic process automation (RPA). Here, at least, there is a widespread consensus. RPA is “robotic” software that can emulate user behavior with applications that are part of existing business processes. The software can be customized to interact with those applications, process transactions and data, trigger rules-based responses to events and link to other software systems at the user interface level.

The last part of this definition, “link to other software systems at the user interface level”, is at the heart of our question, for certainly screen scraping is exactly that – an interface with other software at the UI level.

It’s certainly hard to argue screen scraping is innovative. After all, it’s an old technology, beginning as a one-way transfer of data from computer terminal screens by reading the terminal’s memory. For years, screen scraping has been an interface of las 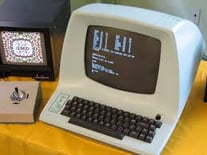 t resort. Faced with the need to link old systems with more modern technologies, screen scraping was often the only way to overcome a lack of legacy documentation, source code and lost skillsets.

Web scraping, on the other hand, sheds some light on why RPA is getting attention and why innovative is not necessarily a misplaced adjective. As with screen scraping – though not as dramatically – this technology is not new. It incorporates the cross-platform, open language document object model (DOM) to access and interact with HTML, XHTML, and XML objects.

While DOM dates back to the 90’s and Netscape, the uses for this tool are associated with leveraging web resources and are much more dynamic and transformational than those typically seen for screen scraping.

For example, UiPath customers can use web scraping to pull a competitor’s prices off its website and do two useful things. One, import those prices into a data file and run comparisons against the their own price listings. Two, run comparisons between the competitor’s newly created data file and the prior pricing data file. The first comparison will highlight competitive weaknesses the customer needs to correct and also pricing advantages that should be exploited. The second comparison will provide insight into the competitor’s pricing strategy and trends.

In this example, robotic process automation provides data and analytic benefits well beyond the more familiar cost, accuracy and scaling advantages it is known to bring to repetitive and rules-based activities. By doing so, the technology makes a case for being an innovative adaption of existing technology. At the least, it makes a case for enabling innovation – and doing so through rapid and intuitive deployments.

While this discussion has focused on screen scraping and web scraping, UiPath products and solutions go far beyond those familiar technologies to illuminate RPA possibilities and make a persuasive argument for innovation.

One highly innovative UiPath solution addresses the challenge posed by Citrix. While Citrix deployment can save IT departments significant amounts of money, the Citrix XenApp retains the logical elements behind the user interface on its server. All the user sees are screenshots of the application running on the server. Without access to the UI logical elements, Web scraping would seem to be impossible.

Instead, UiPath developers took the imaginative step of architecting a powerful image recognition engine, designed and optimized to find and capture screen images in less than 100 milliseconds. In addition, text is  captured via either a shared clipboard or on-screen OCR.

By overcoming these Citrix automation obstacles, UiPath made it possible for those customers with XenApp to use the integration recorder product and achieve the same high levels of cross-application process productivity improvements enjoyed in non-Citrix environments – and do so without any increase in deployment time.

While there may always be differences of opinion, it certainly seems reasonable to say aggregate RPA capabilities and functionalities meet the threshold of innovation.