We’re going on a slight detour today away from robotic process automatiom (RPA) and software robots to look at the future of the physical robot. It’s clear that what’s happening in the world of RPA and business processes is also happening in the world of manufacturing. These two camps of robotics can learn a lot from each other, and the robot leading the charge is Baxter. 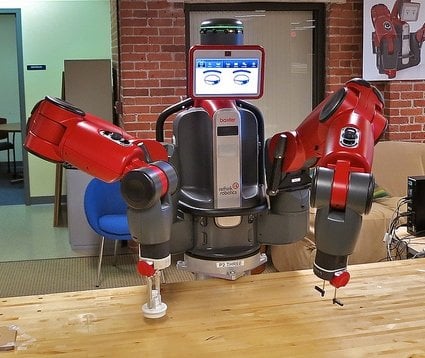 If you’ve read any mainstream articles about robots in the workplace, you’ve probably seen Baxter. He’s most recognizable for his two jointed arms, his emotive face screen, and his bright red color. Baxter was developed by Rethink Robotics and introduced in the fall of 2012. His purpose is to take over the dull, repetitive work in a factory that has previously eluded machine automation. Packing and unpacking boxes, putting things on a conveyor belt, and generally moving things around, Baxter specializes in manipulating objects within reach of his arms. He was also specifically created for small- to medium-sized manufacturers who may not have the scale of production, resources, or space for big machinery.

Any of this sound familiar? The connections to RPA don’t stop there. Baxter can be trained in minutes by anyone, either by physically moving his arms around or through manual controls – no fancy computer programming necessary. He’s designed to interact with his environment as a human would, at least as far as the sense perception software allows. Objects have to be approximately where Baxter expects them to be, but he can also adjust his arm to get the best grip. Baxter is easily retrained for various tasks, making him extremely flexible, and he is easily integrated into a human workforce. High-quality sensors all around his head and arms keep him from accidentally hurting his human coworkers (an important issue in manufacturing robotics). And to top it all off, he only costs as much as an FTE’s annual salary.

Now, this isn’t just a commercial for Rethink Robotics. They may be leading this new RPA-like trend in physical robots, but we can’t wait to see what other companies and research labs create in response. Competition creates the drive for innovation. Perhaps the most important aspect of Baxter is his purpose to be a cooperative robot (his name was originally “Cooper” as a play on the word). Already, manufacturers who are using Baxter have seen an increase in productivity, which makes them more competitive. Cooperative robots will not take jobs; they’ll create more business for a company which means more human jobs.

When humans and robots work together, nothing can stand in the way.