It was around 4:00 p.m. on Sunday, August 11, 2019. I was anxious to know the results of the first-ever RPA League Hackathon conducted by UiPath in the United States. Judges were doing their job inside the panel room while students and participants were happily networking. I was completely silent sitting in a corner doing nothing. I was remembering my past three months, thinking about what made me choose this path and Robotic Process Automation (RPA) journey.

Going back to my story, in the last week of April 2019, I was randomly Googling something about automating a task for a routine software job. Then, I found a YouTube tutorial of a software robot performing this task with very simple commands. I was intrigued by it, I started digging deeper, and I found UiPath coming up with a technology called RPA. Then, I googled “RPA acronym” in Google and found the three amazing words “Robotic Process Automation.”

After that, no one could stop me. I started looking through UiPath’s website and found that they are offering a free Advanced RPA certification until June 30, 2019* and after that it would be a costly affair.

I prepared a plan that night and decided to get certification by any cost by June 2019. But I only had two months in hand and my other commitments as a full-time employee in a programmer analyst role.

But I never stepped back, and I prepared a rigorous schedule for achieving my certification goal. Then, I enrolled in all the Academy courses offered by UiPath and installed UiPath Studio.

The key was my wakeup time. Every day I used to wake up 4:00 a.m. in the morning to have a fresh start with UiPath and spent almost three hours continuously with short breaks every 25 minutes. I also split the time wisely by doing some pushups during each break. I drank water every break and then got ready to work. After that three-hour UiPath workout session, I used to rush to my day job from 9:00 a.m. to 5:00 p.m. I should note that I’ve watched the Academy videos at 1.75X speed and took notes for each video. In the evening after returning home, I used to spend the time to prepare my lunch and dinner. I followed this routine for 45 days and became an Advanced RPA Certified developer!

Then I found this meetup via the UiPath team, which was their RPA League Texas event in Dallas, Texas, but due to my professional commitments I couldn’t attend the first one. After a few weeks, I got to meet Ronald Davidson from UiPath at a local meetup in Dallas. I felt so happy and positive about UiPath after chatting with him.

Then, after attending the second RPA League meetup in Dallas, I got to meet Judy from UiPath and Dalton, a student from the University of Texas at Dallas. We worked to build a process for completing the RPA Challenge, which was awesome. At the end of the event, they announced the key points about the 24-hour hackathon on August 10–11, 2019. I decided to participate in the hackathon and see how it went. 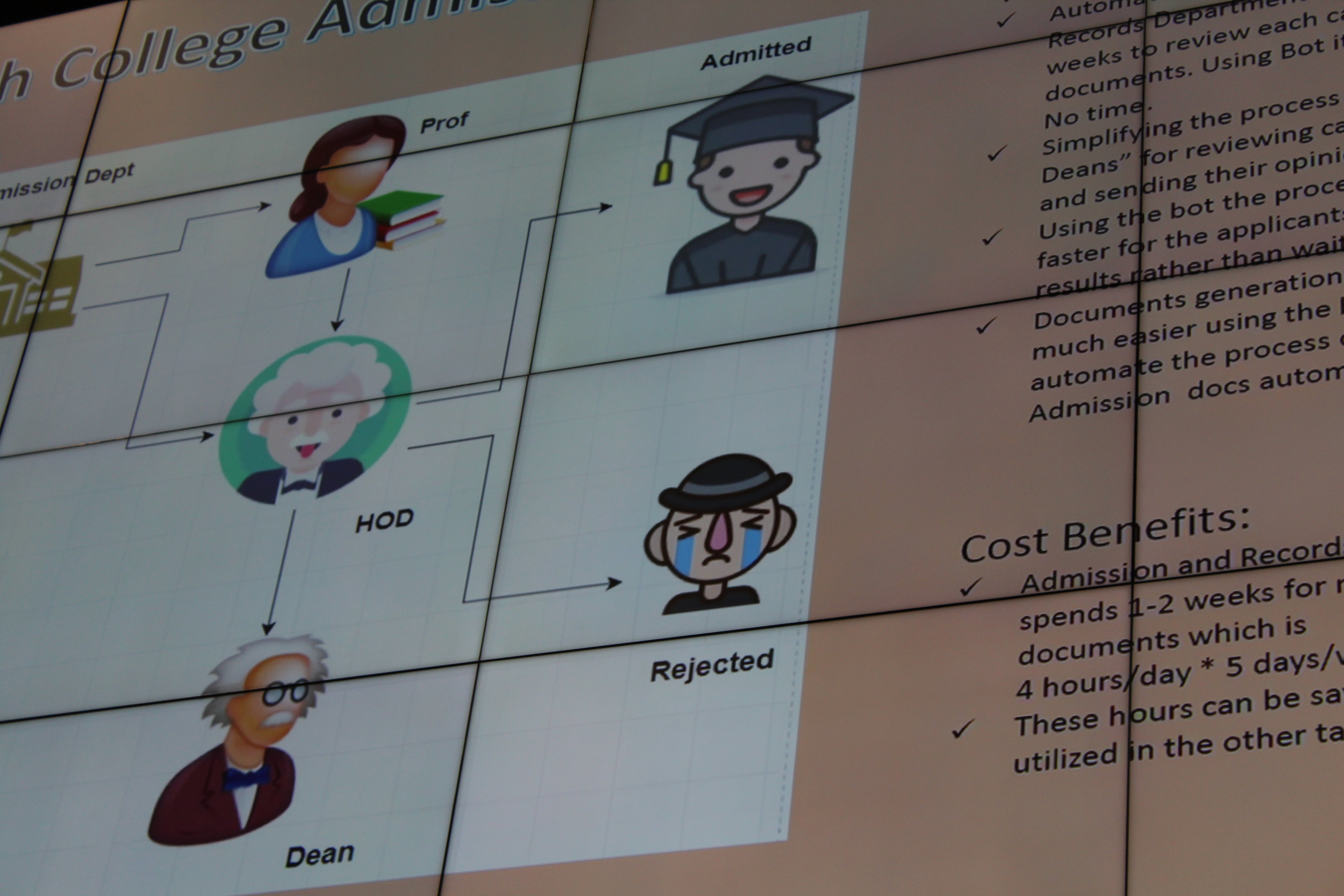 Coming back to my hackathon scene, after I am sitting idle and thinking about my three-month RPA journey, someone mentioned the presentation I had just made at the event. They said it was so unique and I’ll win a prize. Hearing the same thing from a couple of students and folks made me eager about the results. Then, the judges came out of the panel room and started announcing the results. I didn’t believe that I would win this as there are equally good ideas at the panel. But, when the UiPath Product Manager Andrew Hall started calling the winning teams and said that Naveen and Dalton won the first prize for automating the College Admission Process I was shocked and surprised for a moment. 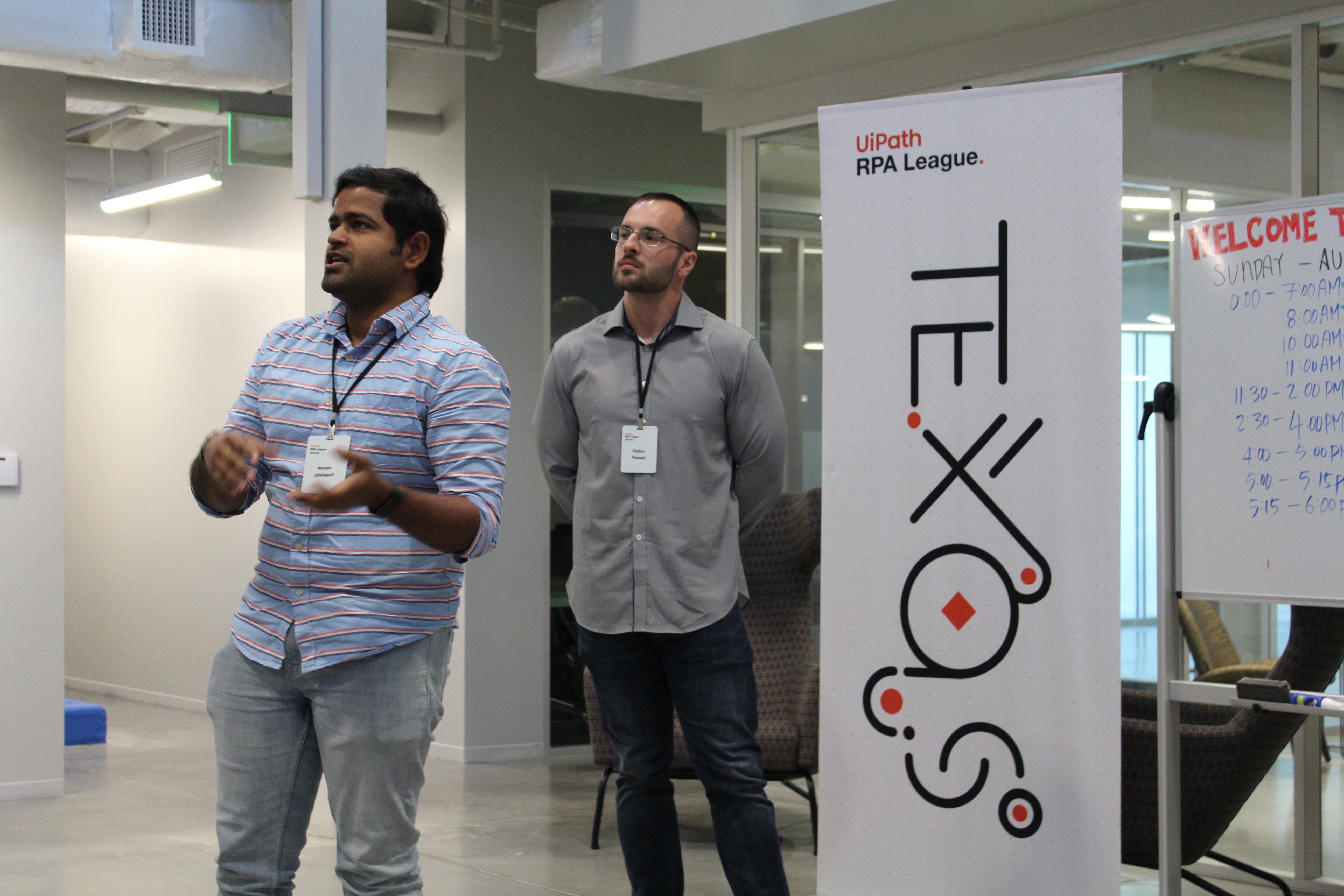 Then, me and Dalton started congratulating each other for the effort and the hard work we’ve shown to win this. When I was receiving the prize, I realized that a clear plan and commitment to any task you do in life will fetch your success and take you anywhere.

So, to all folks keep working hard: dream big but have a crystal-clear plan for how you’ll achieve your goal.

*Editor's note: the date for a free Advanced RPA Developer certification has been extended and is now until December 31, 2019.