Intelligent Automation as a Business Imperative

Intelligent Automation as a Business Imperative

Editor's note: this is a guest post. Views expressed in this article are the author's own views and not necessarily representative of UiPath.

The image many of us grew up with when we heard the word automation was an assembly of mindless physical robots working tirelessly to manufacture the things we love like cars, machinery, electronics, etc. However, those “mindless” physical robots have had a significant impact over the past 200 years. But physical robots will only make up a small percentage of work in the future.

Intelligent automation (IA) makes up a significant percentage of the impact of the automation process on workload. The scope of IA’s impact is close to 84% of the U.S. workforce. IA is software-based automation created to mimic the skills of knowledge workers like physicians, architects, etc. 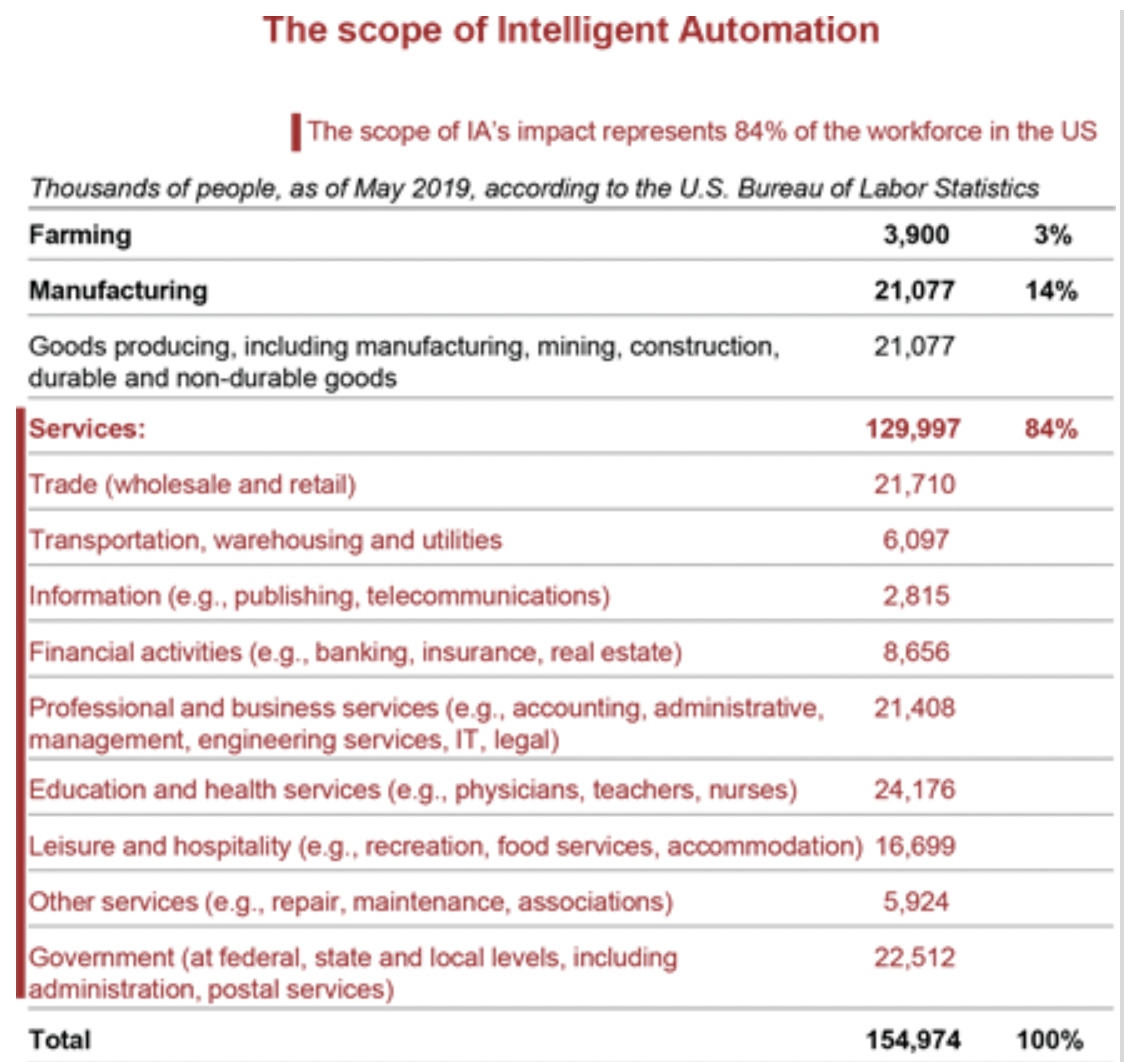 The changing nature of businesses suggests the time has come for IA to be a forethought for businesses.

So, how exactly have businesses evolved in recent times?

To get an answer to that question, let’s take a short trip to the 2020 Fortune 500 list to review the largest organizations in there. I'm talking of businesses with more than 25,000 workers. The result my review was a list of 256 organizations, of which the top five include Facebook, Apple, Alphabet (Google), Microsoft, and Abbvie in terms of profitability. This list of top-five ranking companies is based on their profit per worker.

To understand the evolution of businesses over recent years, my research partner and I compared the profitability of the 256 organizations by creation date. The research gave a new ranking of profitability, with younger companies like Facebook (founded in 2004) generating more profit per worker than older companies such as IBM (founded in 1911) even though IBM had more employees than Facebook.

There is a strong correlation between the age of organizations and their profitability per worker. Let’s break it down in simpler terms. What the research showed was that the older the organization, the less profit it brings in per worker.

This research indicates the changing environment of global businesses. Newer companies are less labor-intensive than their older contemporaries are. It also hints that legacy companies may not adapt to newer digital technologies as quickly or easily as digital-native organizations. Digital-native companies that have appeared in the market recently may have a head start as the pace of innovation gathers momentum.

A perfect illustration of the analogy above is the journey of social messaging giant WhatsApp. The company was sold to Facebook for $19 billion when WhatsApp was just five years old with less than 50 workers. That's a dramatic rise in value for the company.

Digitalization of businesses is inevitable

Digitalization of businesses is here and it's inevitable. The winners in this evolving world are the fastest to implement digitalization. You also have to factor in to what extent digitalization is implemented. The next few decades will see a continually changing business landscape and those that are still standing will be highly automated.

To understand this analogy, let’s take a look at the synergy between humans and automation carried out by robots at Amazon. As of June 2021, the company had deployed "350,000 mobile drive unit robots" while simultaneously adding jobs worldwide. We can also look at Goldman Sachs. According to a Bloomberg article, in 2003, Goldman Sachs had 500 workers employed for stock trading. In 2018, three workers carried out that function supported by a team of almost 200 technology experts in other departments of the company.

Staying ahead of the competition today

Right now, digital innovation and technological disruption like IA are vital elements of competitive advantages—alongside other common factors like geopolitics, cost, and talent.

The business world today requires companies to evolve to stay ahead of the competition and the competition is expected to become fiercer in the future as the pace of innovation accelerates.

Swift changes to the business landscape bring a completely new complexity level for business owners and CEOs, and that has tasked them to explore what IA can do for their businesses productivity. That will be discussed extensively in my next article.

In the meantime, check out my other UiPath guest blog posts.

The content of this article is inspired by the Amazon bestseller book Intelligent Automation.