In addition to improving efficiency and reducing errors, improving employee satisfaction is now part of the conversation.

According to our 2022 Office Worker Survey, the vast majority (91%) of global respondents believe automation can improve their job performance. Respondents also see big benefits, including saving time (52%), increasing productivity (46%), and creating opportunities to focus on more important work (45%). Seventy-one percent agree they can focus on more creative work with the help of automation. If they aren’t already, leaders should be thinking about how RPA and automation can support their businesses.

In this post, we’re highlighting five key insights from the State of the RPA Developer 2022 survey results that center of excellence (CoE) leaders should be thinking about.

When an organization first introduces RPA, they typically start with a small team of one to five developers. During this time, they develop the first automation strategy for specific departments in their organization. Then, as team sizes grow, this indicates that organizations are moving to larger scale automation adoption. In other words, companies go for accelerated growth—from small, dedicated CoEs, to shifting their strategy into large deployments of automation and citizen developer enablement.

Related article: Scale Your Automation Program with This 7-Pillar Framework

2. The pool of RPA developer talent is growing

The State of the RPA Developer report finds that, compared to 2021, there are higher percentages of both new and experienced RPA developers.

Three in five developers have transitioned to RPA from other roles, most often from software development roles. The good news: 53% say it was an easy transition. 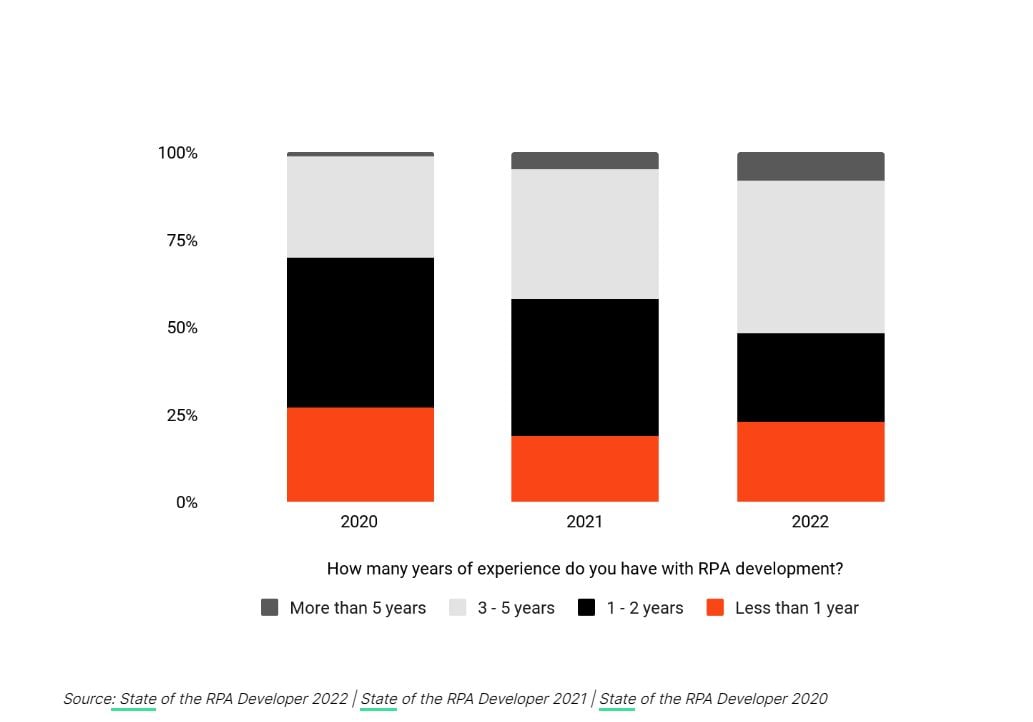 As you build out your RPA teams, you’ll see that developers come from various backgrounds. The key is to provide them with the training they need. When asked how they had educated themselves on RPA, survey respondents are taking advantage of the training offered to them and most commonly rely on video tutorials, online courses, documentation, and online forums.

3. RPA developers are optimistic about their future in automation

Regardless of experience level, RPA developers see themselves growing in the automation space:

Both businesses and those doing the work see the potential and are optimistic about the future. When professionals are satisfied with what they do and see its value, they're more likely to continually educate themselves and work productively.

4. RPA developers influence which technologies their companies use

As you start or build out your automation capabilities, it’s essential to consider the RPA developers who work for you. They’re building the solutions, so their input on development tools is key. Four out of five RPA developers influence which tools they use at work.

The State of the RPA Developer also shows that UiPath is a staple—and it uncovers why. 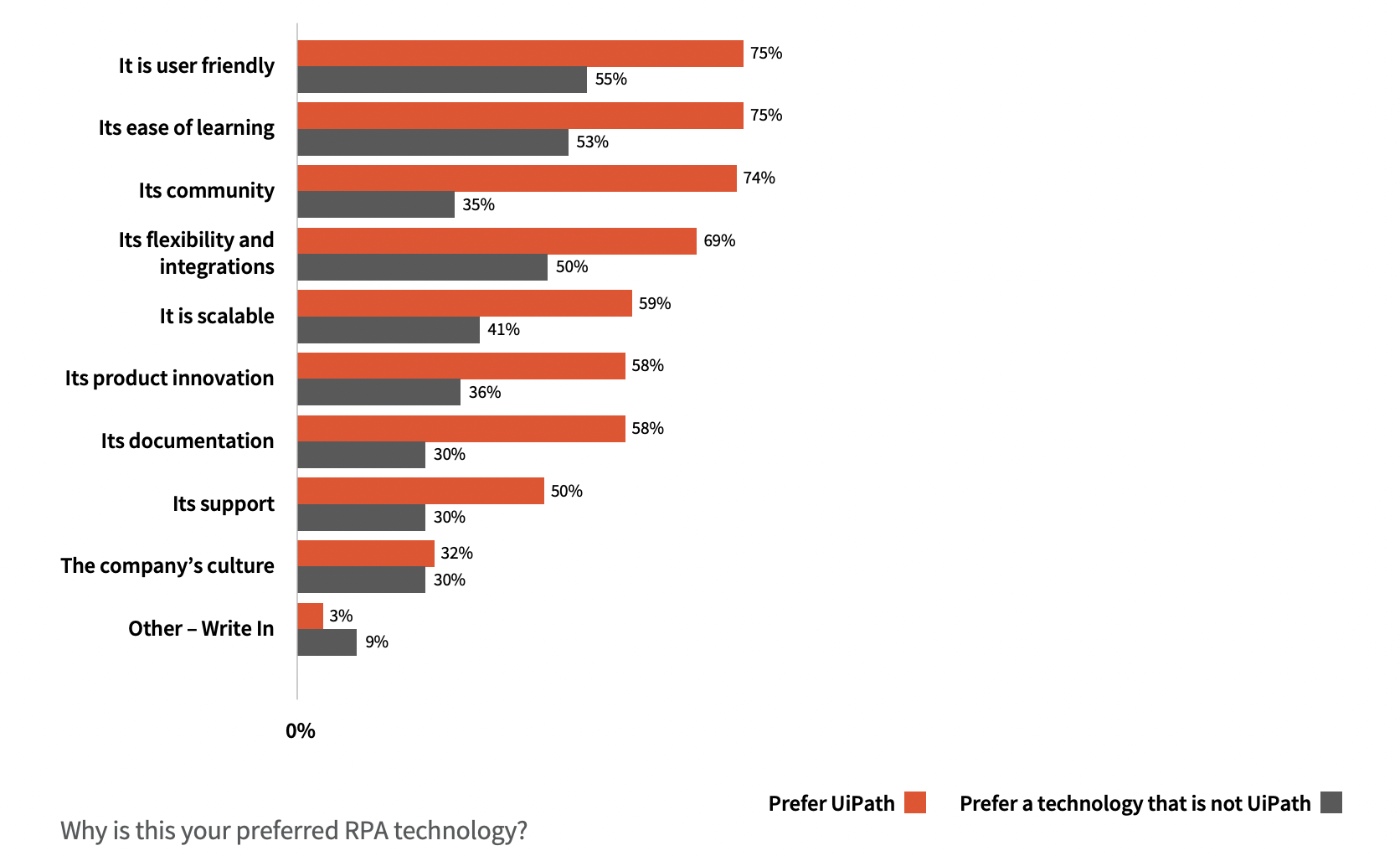 According to survey results, developers who prefer UiPath do so because:

Analysts are finding the same. Recently, Gartner noted that UiPath is "the only vendor among the top 7 providers to grow its market share.”

RPA developers see themselves continuing to build expertise around core UiPath products including UiPath Studio and UiPath Orchestrator. And they plan on expanding their knowledge into UiPath AI Center™ and UiPath Document Understanding.

The majority (73%) of those who used another technology before UiPath thought it was easy to change development tools.

As you continue to build out your RPA capabilities, remember to involve your developers in conversations about the technologies you use. Seventy-nine percent of RPA developers have some or a great deal of influence selecting the RPA technologies they use. These developers are plugged in to the products they use and to the communities that support them.

5. Keep an eye out for the next generation of RPA developers

Because we wanted to understand how the industry would be evolving, we also surveyed university students. One thing that caught our eye is that almost half of student respondents are female, compared to just 25% of current RPA developers. While we don’t know why this is, we’ll be tracking this data over time. Our hope is that RPA will become a more diverse field that's accessible to and encourages participation by women and less-represented communities.

Of those students surveyed, 72% are considering a job in RPA development after they graduate. Among those, more than half (56%) are considering jobs as RPA developers. Other roles garnering student interest include software test engineer/QA (32%), RPA project manager (31%), and business analyst (28%).

Recommended read: A Biology Student and Data Scientist on the Future of RPA

The future of RPA

While RPA developers are optimistic, they also understand RPA is an evolving space. We expect to see RPA’s importance and power grow when combined with AI, ML, and low- or no-code tools. We look forward to continuing this research in the coming years to understand these trends.

Here are some things we’re already seeing in the automation space.

Get your free copy of the State of the RPA Developer Report 2022.

Gartner does not endorse any vendor, product or service depicted in its research publications and doesn't advise technology users to select only those vendors with the highest ratings or other designations. Gartner research publications consist of the opinions of Gartner’s research organization and shouldn't be construed as statements of fact. Gartner disclaims all warranties, expressed or implied, with respect to this research, including any warranties of merchantability or fitness for a particular purpose.