Over the past two years, testimonials for a strong value proposition – sharply lower operating costs and much higher performance levels – have brought extensive media attention to robotic process automation (RPA) technology.  The foundation for the value proposition certainly seems straightforward:  labor currently performing rules-driven, repetitive activities is replaced by automation software.  But recent articles by Phil Fersht and Charles Sutherland of Horses for Sources make a compelling argument that a cloud of confusion has settled over the industry.  How did the media spotlight lead to a circumstance in which, as Sutherland says, “9 out of 10 enterprises haven’t really got a bloody clue” about this technology?

The context for Sutherland’s “clue” is a nuanced grasp of the technology’s benefits and a realistic understanding of the implementation required to make those benefits happen.  He points to a recent HfS survey showing only 11% of respondents have any hands-on experience with this process automation software.  To an extent, this is the chicken-and-egg dilemma faced by every emerging technology.

Fersht, however, makes a more foundational argument against basic knowledge.  Asked by HfS researchers, “Do you fully understand the value propositions for the following enabling technologies for your company? ”; 82% of respondents answered “yes” for the Cloud; 76% answered “yes” for Mobile Apps – and only 50% could answer “yes” for RPA.

Another contributing factor to the confusion and uncertainty around the technology is uneven media coverage of rapid progress in scale and capability innovation.  This meant some 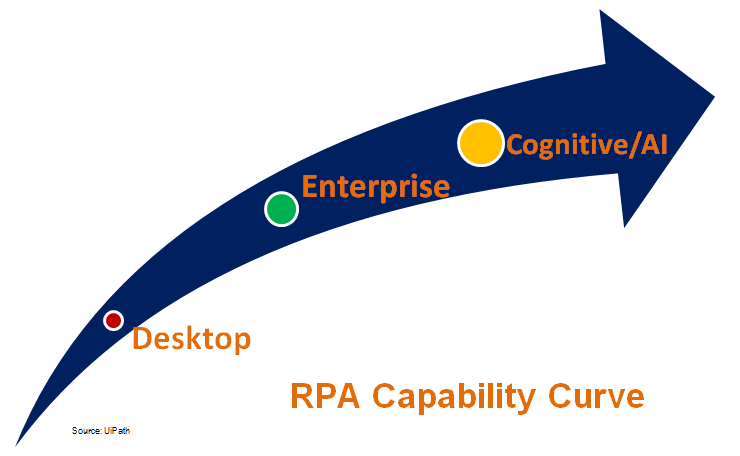 articles were watching the rearview mirror (so to speak) at what robotic automation software had been. Other, on the other hand, were looking – and writing about – what they could see was happening through the windshield.

And what they saw was a steady climb up a capability curve. This climb incorporated powerful new features and functions which redefine the type of roles RPA can play in enterprise workflows and the range of operational benefits associated with those roles.

Desktop: this longstanding role remains what many people envision when they think of the technology: a workstation where a business user triggers an automation robot rather than swiveling between applications’ UI screens to manually extract and insert data from field to field.  This individual desktop automation is also referred to as single point automation.

Business processes are collections of workflow activities. Activities are groups of interrelated tasks, integrated with other, sequential activities

, by entrance and exit criteria. Tasks are work units small enough to be completed by one person and large enough for managerial supervision.

Single point automation is an independent, single instance of automation. Performance and cost benefits can happen, but their magnitude is limited by the scope work.

However, robotic software innovation continues to increase opportunities for desktop automation by expanding digitization capabilities – the means by which unstructured data becomes structured and able to be automated. An example would be incorporating OCR to pull data from scanned documents.

Enterprise: this is an elevated RPA role and one that allows automation to be moved away from desktop limitations and onto a server platform.  Enterprise automation benefits are much greater than those for desktop, especially because it can deploy and schedule groups of robots to complete large volumes of work. Enterprise automation can scale to the scope of BPO volumes, something that was never possible with desktop automation.

Enterprise automation can also be managed to effectively address large volumes of work at both the task and activity level – which puts it squarely in competition with the BPO business model.  These automation management capabilities include:

Orchestration: in order to efficiently complete large volumes of work, the server must have management tools to coordinate and regulate automation between large robot groups (dozens to hundreds), each responsible for related activiti

Deployment and Retirement: the server must also have the capability (typically a management dashboard) to quickly scale automation by easily deploying and retiring robots as work volumes fluctuate.

Monitoring, Reporting & Compliance: the management dashboard should monitor real time performance of all deployed robots and a portfolio of standard reports should be available to measure service level outcomes.  Compliance:  a document trail for robot activities is often created by aggregating the log files of individual robots and archiving them in a repository.

Cognitive: using complex algorithms to embed robotic software’s rules processing with cognitive capabilities is the next major step up the capability curve.  An initial goal of cognition will likely be to enable the technology to make adaptive decisions around event anomalies.  Currently, robotic software treats anomalies as activity errors and relies upon human intervention for resolution.  Cognitive algorithms will drive adaptive decisions by the software around actions to independently correct the error. Shrinking human intervention through cognitive decision-making will increase automation value and performance.

Incorporating the digitalization mentioned earlier, with cognitive decision-making, has the potential to not only transform automation value, but the perception of the automation itself. It may become seen as less static and robotic – and more flexible and intelligent.  Perhaps intelligent process automation (IPA), rather than robotic process automation, lies at the end of the capability curve. The next blog post will look at that possibility.